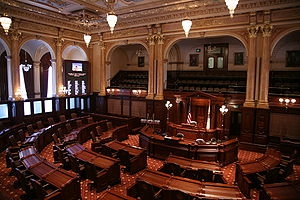 As a result of ignoring the pension issue, the Fitch bond rating agency lowered the state's already weak bond rating. In response to the downgrade, Governor Quinn (D-Chicago) pointed fingers in a June 3 press release.

Today’s downgrade is no surprise. As I have repeatedly made clear to the General Assembly, this will continue to happen until legislators pass a comprehensive pension reform bill, and put it on my desk.

But it wasn't all the legislature's fault. From the Heartland.org June FIRE newsletter (emphasis added):

Without admitting or denying wrongdoing, Illinois officials have agreed the state will “cease and desist from committing or causing any violations of Sections 17(a)(2) and 17(a)(3) of the Securities Act of 1933.” The agreement with the Securities and Exchange Commission stems from charges the state engaged in securities fraud by failing to inform buyers of Illinois government debt of the state’s true unfunded pension liabilities.

The Government Accounting Standards Board approved last year a policy requiring state and local governments to keep pensions on their budget balance sheets, so bond investors know how much states really owe. States like Illinois and California have pretended that their pensions were fully funded. Illinois has pension liabilities for current employees of about $96 billion, California over $120 billion.

These credit downgrades come with serious consequences. They send a continuous warning signal to businesses to avoid Illinois, something the state with the nation’s second-highest unemployment rate and rank of 48th in economic outlook can’t afford. Every downgrade puts a further strain on Illinois’ reputation for doing business and attracting capital and entrepreneurs.

Politicians may avoid making the real reforms that Illinois needs, but they can’t hide from the market.

Lawmakers have to do something, but so far a standoff between House Speaker Michael Madigan and Senate President John Cullerton has prevented any progress. According to Matthew Besler, President of the Illinois Opportunity Project,

But just “doing something” is a bad idea if it means passing either of the current bills. Neither bill will solve the problem, and some unhallowed union of the two bills will not do the trick, either. Among other defects, both bills contain a funding guarantee that would constitutionally bind the State to the payments in the bill, forever, and it would be almost impossible to change them. As hard as it is to believe, these proposed “fixes” would make the current problem worse, and harder to fix, in the future.

It doesn't help Mr. Madigan's bargaining position much that his daughter may run for Governor, and anything the elder Madigan does, or fails to do, will be used by his daughter's opponents in both the primary and general elections in 2014.

Illinois is in rough shape. Decades of being governed by the Chicago machine have taken their toll, and the end is nowhere in sight. Conservatives, libertarians, and reformers, while retaining our own identity and ideals, need to work hard to organize inside the political parties, where candidates are chosen and have a chance to get voters to the polls.