An Illustrated Timeline of the IRS Targeting Scandal

With new details emerging every day about the extent of the IRS targeting of conservative groups, FreedomWorks Creative Manager Matt Battaglia breaks down the timeline of events. Click 'read more' for images! 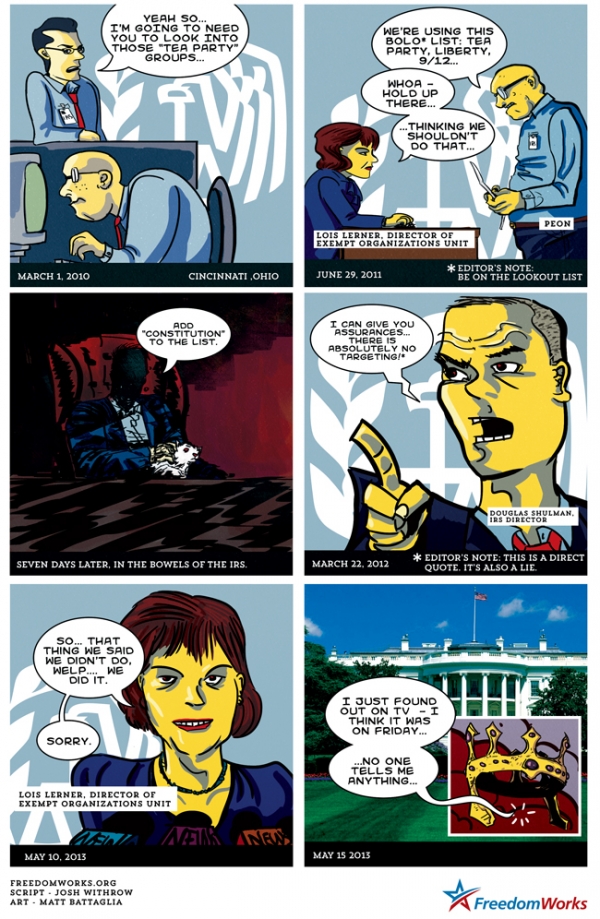 The condensed timeline, largely based on an awesome compilation by blogger Doug Ross:

27 June, 2011 - Lois Lerner, Director of Exempt Operations, learns of the inappropriate targeting.  She initiates an audit of the office involved, but the targeting continues.

3 May, 2012 - Deputy Director Steven Miller informed that targeting and harassment is occurring.

22 April, 2013 - When Jay Carney claims the White House Counsel learned of the targeting.

13 May, 2013 - President Obama claims to have learned about the IRS targeting the previous Friday, "on Friday, from news reports".

15 May, 2013 - Acting Director Steven Miller is announced to be resigning in June, 2013 (when he was going to be leaving anyways).

17 May, 2013 - The New York Times reports that the White House learned of the IRS targeting five months prior to the election.

22 May, 2013 - Lois Lerner gives an opening statemen in testimony before Congress, but pleads the fifth and refuses to answer questions.

Note that in addition to IRS Director Shulman testifying before Congress that no targeting was happening, top officials Steven Miller and Lois Lerner were both repeatedly specifically asked about the targeting of conservative groups. Neither one revealed the investigation that they knew to be ongoing.

If you or your group was targeted or subjected to harrassment or special targeting by the IRS, share your story at irstarget.com!

There really are no words to describe how low I feel our country has sank. It's just so outrageous to believe that a sitting President would take the chances this one is taking! I guess when you believe you are totally insulated by the various czars and gang brothers, there's not too much that one would worry about, obviously.
I so love this country and it just breaks my heart to see how corrupt the government has become. Even more heartbreaking is how the seem to be winning by their dirty Chicago style politics.
I'm just one little old lady here in the woods, but one thing I will never stop doing and that is PRAYING FOR MY BELOVED AMERICA. I beg all you GOOD folks out there to do the same. Prayer is power, and IT WORKS!!!