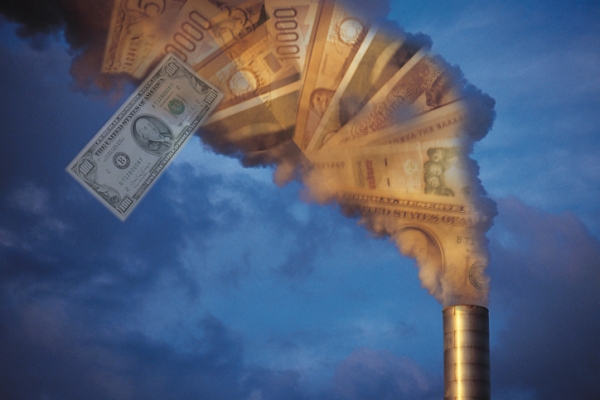 When the Federal Government desires less of something, they tax it. This is an effective solution to curbing behavior that the government has deemed unhealthy or undesirable. When the government wanted to reduce smoking, it placed high fees upon cigarettes as a deterrent. Thus the proponents of a carbon tax believe they have an effective way of limiting carbon emissions.

The problem is that, unlike smoking, activities that result in carbon emissions are pan-economic, from energy production to transportation. This tax will cause dramatically higher costs on literally every good and service, while creating energy scarcity.  Yet, the Obama Administration has never ceased its praise of the proposed tax.

Through the Freedom of Information Act, Dr. Chris Horner recently received documents from the Treasury Department’s Office of Environment and Energy. The document disclosed that the Obama Administration has plans to institute a carbon tax rough $25 per metric ton. These proposals must be defeated through the legislative process otherwise the costs to our already anemic economy would be catastrophic.

The US needs to take a lesson from Europe and Australia’s failed energy taxes, both of which undermine energy markets and overburden their economies. When it comes to energy, the European Union gives us a clear example of the burden of energy taxes. Their cap and trade system taxes companies who exceed their carbon emissions by forcing them to purchase credits from other manufactures that are below their allotted emissions. For the past decade, this policy has sapped life out of an already struggling European economy .This gives tax incentive to consume less energy and hence be less productive.

Thomas Pyle, president of the Institute for Energy Research explains:“Europe’s experiment with carbon markets and lavish subsidies for green energy producers has been a complete failure, and yet, many policymakers, led by President Obama, want the United States to follow the exact same ruinous path.”Australia has fared no better with its carbon tax. Australia instituted a carbon tax that charged companies a flat fee for every ton of carbon emitted. The policy is widely considered an unmitigated disaster . Greg Evans, chief economist for the Australian Chamber of Commerce and Industry, stated, "It defies logic to adopt a policy which even the Treasury acknowledges will lower our standards of living and be harmful to national productivity."

A carbon tax would cripple the American economy as 83 percent of the energy powering America comes from hydrocarbons which would be hammered under the Obama administration’s proposed standard. By instituting a carbon tax, a substantial cost would be placed on everything America produces and consumes. According to the National Association of Manufactures, the output in energy-intensive sectors could drop by as much as 15 percent and 7.7 percent in non-energy intensive sectors. The effect on industry is undeniably dramatic.

What is worse and often overlooked is the carbon tax’s impact on lower income families who can least afford to pay the increased cost. The congressional budget office (CBO) predicted that $28 per metric ton tax on emissions would increase annual consumer costs from $425 for the lowest-income families to $1,380 for the wealthiest. As a percentage of income, the low-income families pay 2.5 percent of their after-tax income on energy compared to less than a percent for the highest earners. Low income families already pay a disproportionately high percentage of their income on energy, there’s no need to increase their burden.

In all, this tax would undermine growth across the economy by raising net energy costs and making businesses less competitive in global markets.  In reality, a carbon tax is not a fee on big business, as progressives like to frame it, but a tax increase on the entire energy consuming economy. Americans should oppose this draconian tax and instead reduce regulation and special benefits to allow energy sources to compete to provide the cleanest and most affordable forms of energy through the free market.

On behalf of FreedomWorks activists nationwide, I urge you to contact your representative and ask him or her to vote YES on the resolution expressing the sense of Congress that a carbon tax would be detrimental to the United States economy, H.Con.Res. 119, introduced by Rep. Steve Scalise (R-La.).

FreedomWorks has signed onto the following coalition letter, led by the American Energy Alliance. This letter supports Rep. Steve Scalise's (R-LA-1) House Concurrent Resolution 89, which expresses the sense of Congress that a carbon tax would be tremendously destructive to our nation's economy.

0
02/24/2016
It's Not Gridlock That is Blocking a Carbon Tax, It's Science and Economics
"https:\/\/www.freedomworks.org\/content\/its-not-gridlock-blocking-carbon-tax-its-science-and-economics?social=facebook_share"
null
https://fw-d7-freedomworks-org.s3.amazonaws.com/styles/thumbnail/s3/te_social_media_share/fw_default_0.jpg?itok=35IWEBMb
Blog

As one of our millions of FreedomWorks members nationwide, I urge you to contact your representative and urge him or her to vote YES on the Scalise Amendment to the REINS Act (H.R. 367).  This amendment would prevent any fee, levy, or price from being attached to carbon dioxide emissions.

0
08/01/2013
Golfer Mickelson Will Hand Over 61% of Earnings to the Taxman
"https:\/\/www.freedomworks.org\/content\/golfer-mickelson-will-hand-over-61-earnings-taxman?social=facebook_share"
null
https://fw-d7-freedomworks-org.s3.amazonaws.com/styles/thumbnail/s3/te_social_media_share/fw_default_0.jpg?itok=35IWEBMb
Blog

Golfer Mickelson Will Hand Over 61% of Earnings to the Taxman

Back in January, golfer Phil Mickelson made a comment about the rate of taxation he pays for his success. Not only is he paying high federal taxes, but his home state of California is gouging him as well.

After 10 Years: Time for FutureGen to Retire

Ten years ago, the United States made an investment in a new environmental idea of clean coal through a cutting edge project known as FutureGen.  FutureGen, a public-private partnership between the U.S. Department of Energy (DOE) and the FutureGen Industrial Alliance, was intended to construct a net zero-emission fossil-fueled power plant. To reduce carbon emissions, FutureGen uses carbon capture and sequestration (CCS) technology to inject carbon into geological formations rather than allowing emissions into the atmosphere.