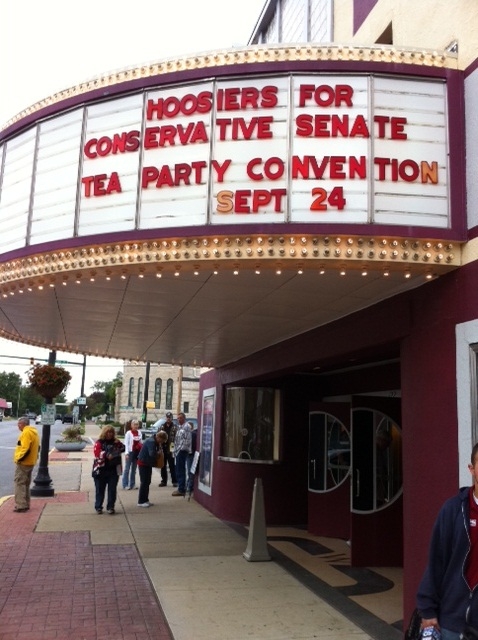 On September 24, FreedomWorks joined Hoosiers for a Conservative Senate and over 300 activists from local groups across Indiana for a Tea Party Convention in Greenfield to decide which candidate they would support in the 2012 U.S. Senate race.

“The movement believes strongly in a bottom-up rather than top-down approach, and this convention -- which gives each attending group two delegates to cast votes in a straw poll -- allows for that,” Monica Boyer, a Kosciusko County tea party activist told the Indianapolis Star.

The convention was composed of both attendees, who cheered from the gallery, and delegates who waved placards denoting their respective congressional districts. After speeches from local leaders, delegates cast their votes in a straw poll for either incumbent Senator Richard Lugar or State Treasurer Richard Mourdock. As the delegates came on stage to vote, their district placards were combined to form an American flag.

Delegates casting their votes for either Sen. Richard Lugar or Richard Mourdock

In a decisive victory and an affirmation of his grassroots support, Richard Mourdock received 96 of the 97 votes cast by the delegates. After the vote, Mourdock spoke to the convention about the passion of the activists and compared their resolve to that of our Founders. 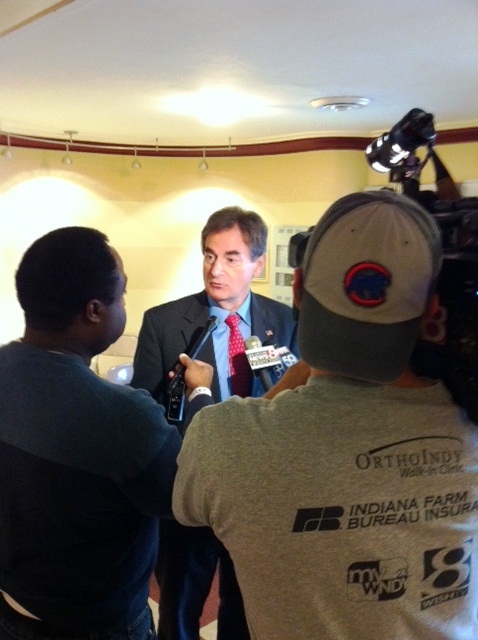 Mourdock addressing the media after his straw poll victory

“If five people in the backroom of a bar can change the history of the world, what can come from this meeting?” Mourdock said, recalling that the American Revolution was planned by a small group of patriots in a Boston tavern.

The rebuke of Sen. Lugar by the activists was seen as inevitable given his long record of opposing conservative principles.

"The nation has a problem with not only a budget deficit, a severe one, but also a massive debt problem. He's been there for 36 years, but he hasn't done much to combat that, so it's time for somebody else," said Greg Fettig, co-chair of the Hoosiers for a Conservative Senate.

FreedomWorks President Matt Kibbe, Vice President of Communications Adam Brandon and I addressed the convention, encouraging local activists to stay organized on the ground and in the media.

"We told the crowd, 'This isn't the end — it's the beginning. Everybody go out and buy a new pair of shoes because we are going to pound the turf and go door to door, make phone calls and everything else,'" Fettig told the Associated Press.

I'm a native Hoosier; but, have been gone a long, long time. I'm proud that the Tea Party members gave a ringing rebuke to RINO Lugar and endorsed a true Conservative in Richard Mourdock. It wouldn't surprise me at all if Lugar would switch and run as a Democrat - after all, that's the way he votes most of the time. I'm also affiliated with the Tea Party movement - 1st Brigade, Tea Party Patriots. We need to keep the momentum going and prove that the 2010 elections were just a preview of what's to come in 2012! A clean sweep with a very large broom!

It was a great day, but you haven't seen anything yet. Just wait for the headlines the morning of May 9th.