Between the packed stadium, the roar of 15,000 freedom-loving Americans, and a line-up of passionate, conservative speakers, FreePAC sent a loud message to all who would listen: the Tea Party is not dead!

In fact, the pro-liberty movement is so popular that it’s spread beyond America to countries around the world. At FreePAC, FreedomWorks hosted 30 international activists to participate in grassroots training, networking, and brainstorming about how to spread the message of limited government, lower taxes, and liberty in their own countries.

Yuya Watase, founder of the Tokyo Tea Party, was invited by FreedomWorks to participate in this exciting weekend, where he had a chance to meet American politicans like Senators Rand Paul and Jim DeMint, and stand on stage with Glenn Beck as he introduced the global freedom movement. Not so long ago, Yuya wrote policies for a Japanese governor, where he began to encourage citizens to get more interested in policy & become invested in their social structures. 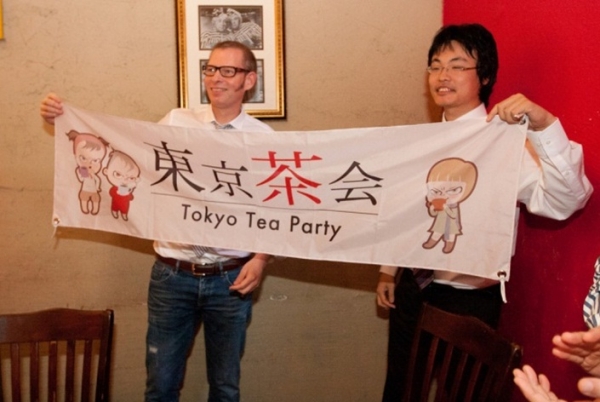 After organizing an international tea party with input from Australia, Serbia, and Italy, Yuya focused on really expanding the Tokyo Tea Party.  The main activity as he sees it today is to really organize presentations and seminars to explain ongoing policies.

Yuya admits he’s borrowed a lot from the US Tea Party. “If I can borrow this tea party name, it is an ideally a great sign,” Yuya told me through his translator. “It’s an interesting process which would link both countries and our history.”

The history of Japan and the United States are not so different, Yuya told me. There are times in the history of both countries where the people began talking about freedom. For the US, Yuya identifies the Boston Tea Party and its modern equivalent; the creation of the Congress was where the freedom movement really began for Japan.

The Tokyo Tea Party also faces some of the same problems that the American Tea Party faces. In Japan, the economy and the media are almost entirely controlled by the local governments. The bureaucracy has vast amounts of power, and politicians have very limited influence on the bureaucracy. This is why the Prime Minister in Japan changes frequently, Yuya explains. “The bureaucracy of the country just walks on top of [the politicians]. Within a year or less, the Prime Minister is kicked out, because it’s impossible and complicated to make any moves.”

The Tokyo Tea Party has a plan of action, despite the difficulties before them. The group has approximately 300 members, but can draw over 2,000 to some events. Through grassroots activism and education, the Tokyo Tea Party mobilizes its members to fight for lower taxes and fewer regulations.

Though it wasn’t Yuya’s first time in the United States, I asked him what he’d been learning from this trip and his time with FreedomWorks. He was extremely impressed after FreePAC, telling me that “in Japan, politicians usually come from a family of politicians – it’s not as if the people have a serious say in what’s happening or how it’s happening.”

In particular, Yuya was impressed with how well defined the concept of liberty was for most Americans. He observed that the people and politicians all understand and respect their liberties and freedoms: a situation that isn’t replicated in most countries.

Though Americans don’t hear much about Japan, the country is also facing financial troubles. Debt is over 250% of GDP, and the bureaucracy controls many aspects of life.

Despite this, Yuya tells me that he is optimistic. “By bringing these ideas [about liberty, grassroots activism, and freedom] back to Japan, I can get Japan to be a healthy, clear thinking country again.”

This was very enlightening and exciting to read. I am very interested in working in the tea party movement internationally, especially with Spanish speaking countries, but with any countries. How can I get involved?