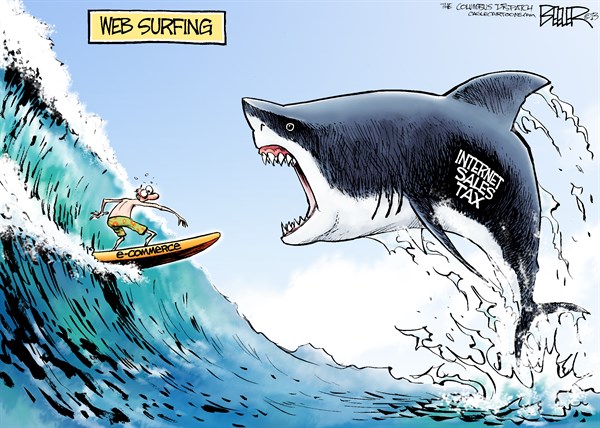 Under current law, online retailers are not required to collect sales taxes on any sales made to out of state consumers. This means that some of your online purchases are tax free. State governments, naturally, are not okay with losing out on this potential revenue.

In order to comply with the Act, online companies will have to become familiar with all of the different rules featured in each sales tax jurisdiction. As of last year a staggering 9,998 separate jurisdictions existed in the United States.

Several versions of the Marketplace Fairness Act have been introduced in Congress, the most recent having been passed by the Senate in 2013. It failed to become law because Speaker of the House John Boehner kept it from coming up for a vote on the House floor.

As the Act comes back from the dead, proponents are disguising their attempt to impose protectionist policies against online retailers as a benevolent desire to make life fairer for brick-and-mortar stores.

But the Act is unfair in and of itself. For example, sales taxes are meant to be paid by the people of local communities and states since they directly receive the benefits funded by those taxes, such as roads or public golf courses. But the Marketplace Fairness Act would compel out of state businesses to collect for those projects, even though the companies never even use them.

John Nothdurft of the Heartland Institute evaluated the Marketplace Fairness Act by saying that it “is anything but fair for the marketplace. Giving states a new open-ended power to tax out-of-state residents regardless of physical presence would be a disaster for consumers.”

FreedomWorks has joined the following coalition letter in opposition to the new internet sales tax bill, the Remote Transactions Parity Act. The letter was lead by the R Street Institute.