IRS Employees Union: Keep Us Out Of Exchanges

The National Treasury Employees Union, NTEU, which represents the IRS employees who harassed and delayed tea party and conservative groups, has come out against the proposal to put federal workers into exchange-based health insurance.

Fancy that: the people in charge of deciding whether you go into an exchange, and who decided it doesn't matter whether your state doesn't want one, don't want to be in one themselves.

As Jeffrey Lord of The American Spectator points out (hat tip, American Thinker),

With the IRS assuming serious police powers of Obamacare, in effect the members of one left-wing labor union will have access to the private health care records of every single American.

NTEU President Colleen M. Kelley has visited the White House at least 10 times, visiting with the President and First Lady at least once.

Find more information on the NTEU in a thorough report at Redstate.com.

The union has a handy way for its members to contact their representives in Congress to lobby against the legislation. 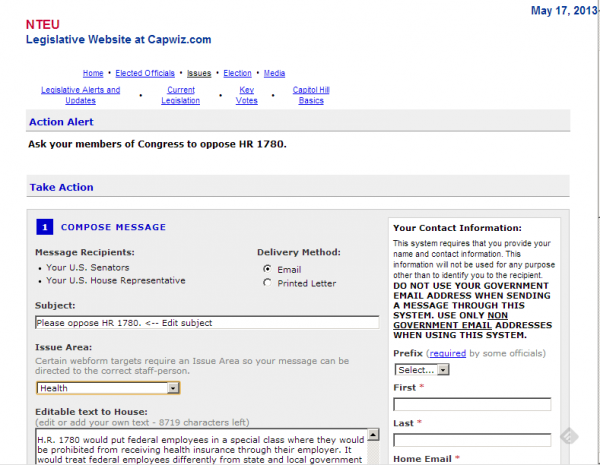 Now, I'm not suggesting that you fill out this form and say you support moving public employees to the exchanges, because that would expose you to IRS audits, harassment, intimidation, threats, and abuse. That's just how our government rolls these days.

But if you should happen to do that, keep in mind that they have no way of knowing whether your email address is legitimate, and this is not a government form. It's just their union thing. Again, I'm not suggesting you take any particular action, nor certainly that you give false information to fill a public sector union email database.

Unions influencing legislators to protect union benefits is just one more reason why public sector unions should not be allowed to exist.