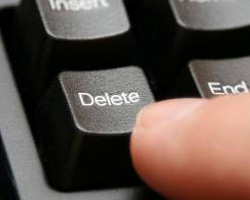 Whoops! There goes another batch of emails.

Precedent is a powerful thing. Once something has been established as acceptable behavior, there will inevitably be a flood of eager followers. That is why trailblazers get all the credit. The brave souls who test the waters, who first go where no one else dares, who push the envelope and set the stage for the rest of us. In many walks of life, such as science, exploration, and philosophy, these people are heroes, pushing mankind forward even when it is dangerous to do so. In politics, however, the trailblazer all too often covers territory that would have been better left unexplored.

Lois Lerner is one such trailblazer. Far from being a hero, she taught the nation’s bureaucrats that they can destroy evidence of wrongdoing without consequence. The results have been quite predictable.

Shortly after the announcement that the Internal Revenue Service (IRS) had conveniently lost or destroyed all the relevant emails that might implicate Lerner’s superiors in the targeting of conservative groups, there was an almost audible click as the power of this previously unthinkable tactic dawned on other regulatory agencies. At first, the IRS claimed only to have lost Lerner’s emails. Then the number expanded to six individuals related to the case. Now, the IRS has bumped that number up to “less than 20,” a characteristically vague claim that probably means “19.” But the IRS was far from alone in this tactic.

The Environmental Protection Agency (EPA) was the next agency to capitalize on these revelations, misplacing a collection of emails related to an investigation of suspected collusion in a decision to block the opening of a gold and copper mine. After waiting a few weeks to make sure there would be no repercussions, the Federal Election Commission (FEC) has now jumped right on the bandwagon as well.

The FEC is now claiming to have destroyed emails belonging to April Sands, a former co-worker of Lois Lerner who resigned her post after admitting violating the Hatch Act, a law that prohibits employees of executive branch government agencies from engaging in political activity on the taxpayer’s dime. Sands sent out tweets attacking Republicans and praising Barack Obama, as well as taking part in a partisan webcam discussion from FEC offices.

The rash of missing emails is hindering Congress’ ability to conduct investigations into misconduct, a vital function of a working, representative democracy. More important than these individual cases, however, is that regulatory agencies are now learning that their actions have no consequences and no accountability. They can do anything they want, and if they get caught, they can simply destroy the evidence.

Regulatory agencies are already run by unelected czars able to bypass Congress and effectively make laws unilaterally. With the removal of the last shreds of accountability from these bureaucracies, their power becomes almost limitless. It’s utter lawlessness, and it should terrify every American who values their freedom.

The FEC is only the third agency to destroy evidence related to a congressional investigation. If nothing is done, many more will doubtless follow. So far, two federal judges have ordered that the IRS explain their missing emails under oath. It is important for individuals to keep the pressure on Congress to get to the bottom of these scandals and hold agencies accountable for their misconduct. We can’t afford a precedent of lawlessness.