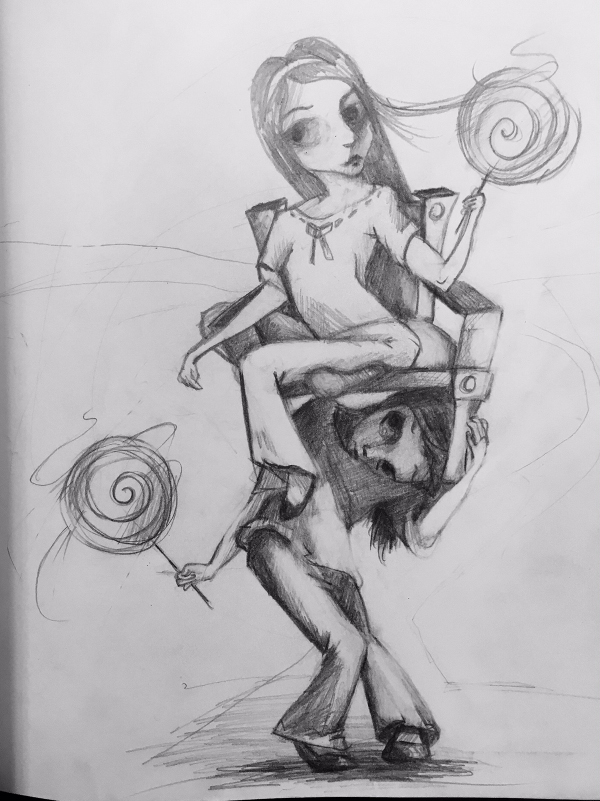 Professionally, Ashley is a graphic designer. The use of computers and other technical tools inherent to the marketing industry have certainly influenced the direction of her artistic development but have made it no less traditional for the marks they have left on her creativity.

The foundations of Ashley's work are created not only in the initial concept but also the uniqueness of expressing a complex narrative. Through the use of bold color schemes and meticulous rendering techniques, she grabs her audience and holds their attention first; allowing them to begin to process the concept in depth. It is within these principles that she can evoke thought, plant ideas, and broadcast powerful messages - forcing the surrender of attention within the mind of the viewer to her concept.

Though Ashley's work is not inherently political, the predisposition of the viewer might take her imagery in that direction. Her bird paintings, for instance, invoke thoughts of freedom struggling to escape tyranny. Some birds are caged while others fly free. Some birds are caught in the act of escaping their bonds. Other subjects, such as King Kong, delve into social issues. Most of her subjects play on a dichotomy of whimsy and mischief through subtle symbolism and a bold underlying narrative.

Ashley has recently crossed blatantly into the political realm with a work in progress addressing the arbitrary rule-making that is crippling our education system. The bold lines and implied movement of her initial sketch foretell a compelling painting on the subject of a rampant entitlement culture replacing merit-based standards with vanity. Below, you will find her initial sketch, as well as the concept behind the painting. While perusing her wider body of work, you might imagine the final outcome of this compelling piece of art. I invite you to take a moment to view and share her art.

Work in Progress - The General's Gifts:

My daughter’s middle school is infuriating. They have two sections of students. One group is labeled “The Gifted Program" and the rest are labeled “The General Population”. When I investigated, a clear delineation between the academic course studies within the gifted and the general programs was difficult to pinpoint. The gifted group seems to have far more students than any gifted program I’ve ever known; almost 50% of the total student body. I am of the impression that many these kids aren’t actually gifted. The program (to me) seems a product of whiny parents who feel the need for entitlement, regardless of merit. Perhaps the idea of their child labeled as part of the “General Population” doesn’t sit well with them. I agree, it’s an ugly title that strips children of self-worth, and doesn’t offer any incentive for improvement. Either they're “gifted” or they’re part of "the great unwashed". It sounds like a prison rather than a school.

My painting is about how the gifted program at my daughter’s government school appears to be a political sham. “General Population” students are saddled with the yoke of this false "Gifted Program," educated with the same academic courses, while receiving none of the accolades therein.

Ashley Norfleet is a professional and freelance web and graphic designer. She is also a libertarian, a painter, and illustrator. Her art can be viewed at Flickr and Liberatchik.

As we usher in spring down here in the south, I thought I would take the opportunity to share some art that focuses on nature without the environmental dogma that is so rampant in the art community. David Joyner is a self-taught artist from my home state of Florida. Much of his work reflects aquatic themes and the vibrant colors of his world. As always, I am pleased to share art with you that illustrates the beauty and of realism.

We've been working hard to break down political barriers in the art world. This month at Liberatchik, we're featuring the work of folk artist Kathy Graybill. Kathy has been one of the most directly inspirational artists I have met over the years. Her beautiful and complex body of work has motivated me to pursue an artistic avenue that I previously thought impractical – hand painted furniture and primitives. This summer, I drove down to Atlanta for the 21st annual Folk Fest. Kathy and her husband were there with a wide array of their painted signs and furniture. Seeing an entire booth of her beautiful work was intimidating and overwhelming – but also inspiring. I can’t even begin to imagine the number of hours invested in the layering of the paints and glazes applied to the pieces.