John McCain and the Hatch Effect 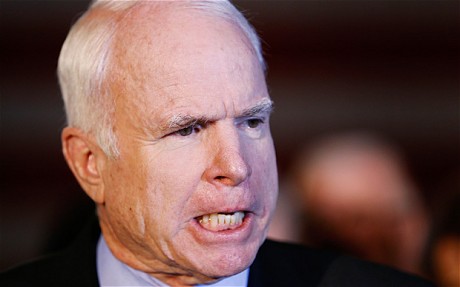 John McCain only cares about conservatism in an election year.

Question: When can you count on a moderate, establishment Republican to suddenly see the light and start voting like a conservative? Answer: When their job is on the line. This sort of last minute conversion to the cause of liberty 12 months before an election is known as the Hatch Effect, after Senator Orrin Hatch who exhibits this tendency with particular blatancy.

These days, however, there’s another senator who perhaps best exemplifies this phenomenon: Senator John McCain. McCain has been a fixture in Washington for decades, and while he constantly refers to himself as a political maverick, the truth is that he has been drifting closer and closer to the Republican establishment for many years. The District of Columbia seems to have that effect on lawmakers. If they stay in town too long, they wind up married to special interests and forget whatever principles they may have once had in their idealistic youths.

As a result, McCain’s voting record has gradually become worse and worse. Small lapses two decades ago have magnified into gaping chasms today. Except, of course, during an election year.

In 2010, the last time John McCain’s seat was up for election, the senator apparently underwent a major shift ideology. Bouncing back after a dismal 69 percent score on the FreedomWorks Congressional Scorecard in 2009, 2010 saw him score an impressive 96 percent. He voted to terminate TARP (a program he had previously supported) and he opposed a campaign finance bill that would restrict Americans’ First Amendment rights, in sharp contrast to the McCain-Feingold bill he cosponsored eight years earlier, that restricted political speech.

There’s a word for this sort of abrupt reversal of previously cherished positions. Actually, there are two: hypocrisy, and pandering.

With this in mind, we fully expect 2016 to be one of McCain’s finest hours. His seat is up for reelection and he already has a primary challenger, so there is little doubt that he will do whatever it takes to convince voters that he is not the establishment moderate his voting record over the last 30 years paints him as.

This is why we at FreedomWorks make a point of keeping score: so that history will not be overshadowed by a few empty gestures at the last minute. Lest the American people be fooled by what is sure to be a banner year for McCain the Conservative, let’s go over a few highlights of the senator’s past votes:

FreedomWorks President Adam Brandon commented on the announcement that Senator Orrin Hatch will retire at the end of the year:

Rep. Mulvaney has a 95 percent lifetime score with FreedomWorks