Jonathan Gruber: "If you like single-payer, then ObamaCare has to succeed" 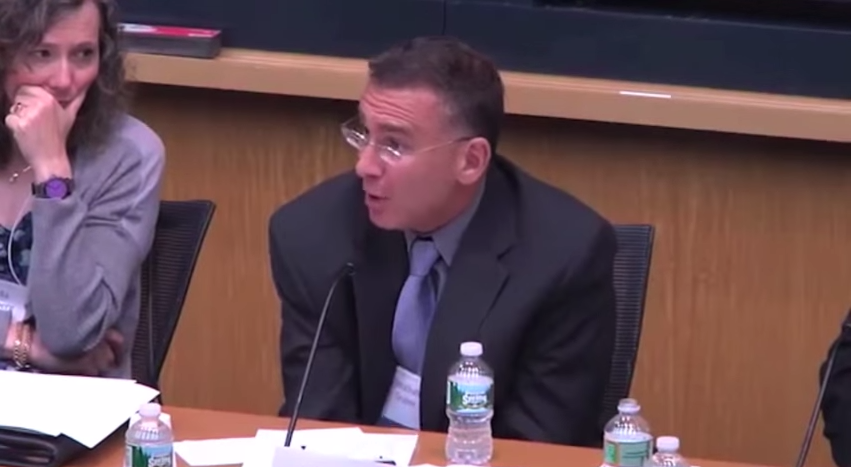 Roughly a month before videos surfaced in which he disparaged American voters and bragged about deceptive tactics used to ram ObamaCare through Congress, Jonathan Gruber, the controversial MIT economist paid nearly $400,000 to help craft the law, appeared on a panel with several other healthcare policy experts to talk about its progress and the continuing debate on healthcare reform.

During the October 2 panel at Havard University, Gruber, in his familiar blunt way, explained his view that if a national, government-run single-payer system is to ever come to pass, then ObamaCare and the Vermont single-payer plan have to be successful.

"There is simply no way we are going to get single-payer at the national level in the near future," Gruber said during the panel discussion. "Now, we have empirical proof of that because [Yale political scientist and healthcare policy adviser] Jacob Hacker thought of a very clever way to test this proposition, which is the public option. Which is to say, lets put it on the table, we'll have private choice and public choice, and if the Democrats are right and the public option is better, then it'll wipe out the private choice. If the Republicans are right, the government choice will wilt, and both sides were afraid that the other side was right, so the other side wanted it."

"It's very important to recognize the fallacy of something I frequently hear, which is, well, if ObamaCare fails, next we'll go to single-payer. That is absolutely backwards. Every single health reform effort moves to the right," said Gruber. "If you like single-payer, then ObamaCare has to succeed, because, unless ObamaCare succeeds, and unless we get these state experiments, like in Vermont and other things, single-payer is never happening. So the notion that in some sense that there are people who oppose ObamaCare because they want single-payer, that is absolutely backwards, and I think that's very important to keep in mind."

This notion isn't a new one. In August 2013, then-Senate Majority Leader Harry Reid (D-NV) said, according to the Las Vegas Sun, that "Obamacare is have a step in the right direction, but we’re far from having something that’s going to work forever." He went on to confirm that the law is a stepping stone to a national single-payer system. Earlier this year, Noam Schieber of The New Republic, in response to a missive by leftist filmmaker Michael Moore, opined that ObamaCare "paves the way" for single-payer by "laying the groundwork for its own fixing."

The Vermont "experiment," on which Gruber consulted, has proven to be a complete failure. Vermont Gov. Peter Shumlin, a Democrat, nixed the single-payer plan this month, citing the economically destructive tax hikes that the state would need to enact to cover the estimated $2 billion cost of the program. "These are tax rates that I cannot responsibly support or urge the Legislature to pass," said Shumlin. "In my judgment, the potential economic disruption and risks would be too great to small businesses, working families and the state’s economy."

Whether fans of single-payer want to admit it or not, the great failure in Vermont shows why a national system is politically unfeasible. Megan McArdle recently explained that lawmakers in Vermont "faced the impossible choice between cutting provider incomes by a lot or raising taxes to nosebleed levels." These are issues that would undoubtedly arise on a national level.

"This holds a lesson for all the folks who hoped or feared that Obamacare was a stalking horse for single-payer. It's not. First, because if you try to take away the current system from the vast majority of folks who had health insurance they liked before the Affordable Care Act was passed, your voter base will get hopping mad enough to enter low-earth orbit," McArdle wrote. "And second of all, even if you're willing to brook their rage over the loss of their health insurance, combining that with a whopping great tax hike on the middle class is a recipe for political suicide."

Keep in mind that the outrage over millions of canceled health plans put President Barack Obama -- who promised countless times that Americans could keep their coverage -- his administration, and congressional Democrats on the defensive ahead of a difficult 2014 mid-term election. That, in addition to the hefty costs of ObamaCare, expensive premiums, high deductibles, and poor provider networks are among the reasons why ObamaCare continues to be unpopular with the American public, according to the latest polls.

Supporters of ObamaCare may continue to claim that it's a "success," whatever that means at this point, but the law is proof that a centralized, top-down policy isn't a panacea for a real problem. Americans have seen the disasters of a big government, top-down healthcare system, and they've rejected it -- in both public opinion polls and in mid-term elections. They're not so easily going to be fooled into trading one disaster for another.