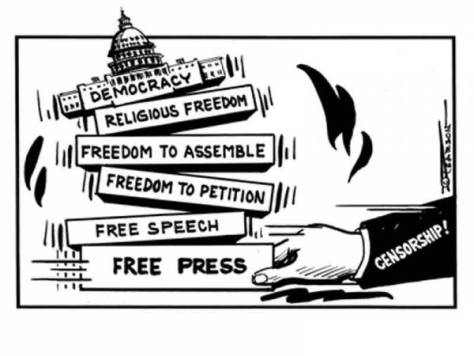 Journalists should be able to put forth honest stories to Americans without fear of their records being seized. Ali Watkins, a 26 year-old national security reporter for the New York Times, had years worth of emails and phone records taken by the government when she failed to reveal her source in a leak case. In 2005, another NY Times reporter served jail time for 85 days for refusing to reveal a source for one of her stories.

Rep. Jordan was extremely motivated by Watkins’ case to emphasize the importance of his bill, stating that the need for a media “shield” is critical now, more than ever. Being that Rep. Jordan is a huge advocate for the Constitution he understands that allowing the government to force journalists to give out information is a huge violation of First Amendment rights. As the world gets more complex it is vital to make sure to create protections for those who can be exploited by the government.

Jordan and Raskin are on two vastly different sides of the political spectrum, however both know that this legislation is imperative to the safety of American citizens and democracy in this country. Freedom of the press is something that people on both sides of the aisle agree needs to be protected, that is why H.R. 4382 has broad bipartisan support and cosponsors from both the Republican and Democratic parties.

Freedom Caucus Chairman, Rep. Mark Meadows (R-N.C.) and Rep. Warren Davidson (R-Ohio) also plan on signing on to the bill. Rep. Jordan had also met with Rep. Mike Simpson (R-Idaho) last week who said, “I would vote for it, because I think reporters ought to have that shield and protect their sources. Otherwise how are you gonna get accurate reporting?”

Accurate reporting is something that needs to be wholeheartedly encouraged in our society. It is very important that we not allow the government to punish journalists for refusal todisclose sensitive information. That not only punishes journalists, but discourages sources to reveal important truths, knowing their identities won’t be protected. By giving journalists a “shield” we are protecting our constitutional rights and freedom of the press.

If this bill does not pass, there is a risk of widespread violations of civil liberties including seizure of personal records, and even jail time for reporters. As Jordan said, ““All these things are examples of where government continues to encroach and violate people’s fundamental liberties.” It is our duty to ensure democracy in this country and by passing this bill we can protect citizens and give the government less access to their everyday lives and information.