Journalists Instructed to Report on Benefits of Obamacare: "There's Only Upside"

Earlier this month, we covered a suspect symposium being sponsored by a pro-Obamacare organization, designed to provide journalists with "specialized education in health care reporting”.

The anticipation of media bias was palpable.  Previous revelations of this relationship prompted one reporter to write, "this sounds like a program to teach reporters to write supportive stories about the health care reform law.”

The latest symposium held on the 17th and 18th of January, was sponsored by the Commonwealth Fund and hosted by the Society of American Business Editors and Writers (SABEW).  It was held at Reuters headquarters in New York City, and had a featured student body of 17 mainstream reporters - including the Dallas Morning News, Reuters, and Money Magazine.

Now that it has since come to pass, concerns of blatant media bias should be even more heightened in the aftermath.

The SABEW has posted a recap of events at their 'Business of Health Care Symposium' on their web site, and the emphasis is clearly directed at the positive aspects of Obamacare.

For example, in a section titled 'Spreading the Word to America', speaker Rachel Klein explains to the reporters that "a key challenge" in messaging lies in "informing consumers of how the ACA (Affordable Care Act) will benefit them".

Klein adds that, "The majority of uninsured Americans don’t know the health reform law will help them."

Benefit.  Help.  The positive tone has been set.

The following is a slide from Klein's PowerPoint presentation at the symposium: 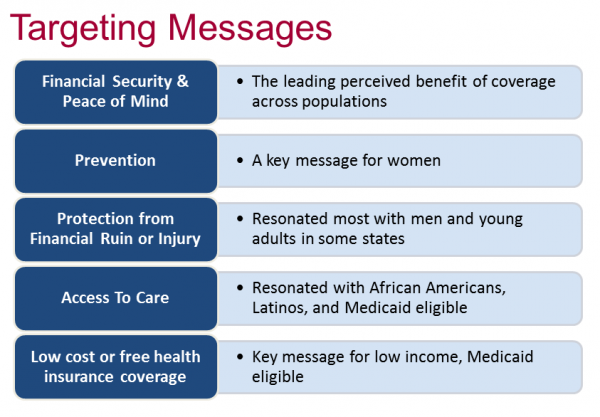 In another section covering the effects of the ACA on small business, speaker Ben Geyerhahn explains how reporters "can alleviate the fear that small business owners have" in regards to the ACA.

Geyerhahn tells reporters that "The simplest thing is to say ... There's no negative here for you."

"There's only upside," he surmises.

Specifically, Geyerhahn is referring to the provision in Obamacare which penalizes businesses who do not provide health care coverage if they have 50 or more full-time employees.

Surprisingly, he tells attendees that he sees no evidence of business owners changing their operating procedures to avoid the employee mandate, despite tangible evidence of this occurring at such companies as Darden Restaurants, Kroger, Taco Bell, Wendy's, Denny's, as well as some college universities.

Not with the Commonwealth Fund financing this event apparently.

The Commonwealth Fund is a private organization that makes no secret of their support for Obama's universal health care plan.  The group’s President up until last month, Karen Davis, trumpeted their role in the reform process:

“The Commonwealth Fund marshaled its resources this year to produce timely and rigorous work that helped lay the groundwork for the historic Affordable Care Act, signed by President Obama in March 2010.”

Perhaps more troubling than looking at the Commonwealth Fund as hosts of such an event when they clearly harbor a pro-Obamacare agenda, is the nature of the actual speakers at this journalism training session.

First, the symposium was kicked off by a former member of the Obama Administration, Sherry Glied, who served under the President at the U.S. Department of Health and Human Services.

Then there are the actual speakers representing the Commonwealth Fund - an act that may violate the SABEW Code of Ethics - Stuart Guterman and David Blumenthal.

Guterman serves as executive director of the Commonwealth commission, and isn't necessarily impartial with his political donations either, having contributed $1,000 to President Obama, and $2,000 to senate Democrats this past election cycle.

David Blumenthal is a former health care adviser to President Barack Obama, and current president of the Commonwealth Fund.  Like Guterman, his political activities include substantial contributions to prominent Democrats during the past election cycle.

You'll notice that Blumenthal's campaign contributions came when he served as chief health information and innovation officer at Partners HealthCare, a position he held up until last month when he became Commonwealth Fund president.

Partners HealthCare itself, also contributed vast amounts to promote Democrat causes in the previous election cycle, as seen in the OpenSecrets diagram below: 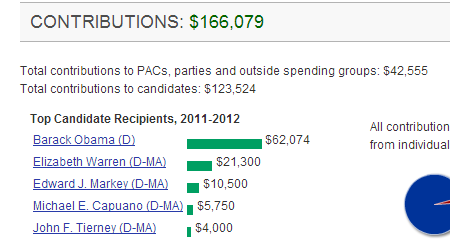 In short, Blumenthal, his past and current organizations, and his associates are strong promoters of the liberal cause for health care reform.  They are cheerleaders for Obamacare.

And they're training journalists on how to provide you, the reader, information on the President's signature legislation.

This may be one of the most blatant examples of media bias and propaganda in journalism today.