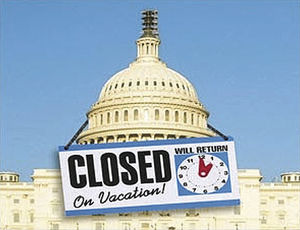 With the majorities in the Senate and in the House, Republican constituents were looking forward to key issues finally being addressed in Congress. Healthcare repeal and tax reform were the two major promises made by legislators. Fast forward to October, though, and neither have been accomplished and senators are have gone home until October 16.

Senate recess is particularly frustrating as tax reform is the one thing that most people in the party can agree on, but we do not even have a tax reform bill yet. Regarding health care, repeal and replace has been the rallying cry of senators for years -- on the campaign trail, when they could not repeal it. When senators had the opportunity, they did not get Obamacare repealed or replaced.

This fraud on the American people is symptomatic of the fractures in the party. They were all on message: repeal ObamaCare! But some were lying. That makes it hard to execute on the promise.

Senators only work Monday evening to Thursday afternoon so their time spent actually working during the week is minimal. This combined with them leaving for an entire week when there’s still much to be done is hard to stomach. On top of this, there’s very little to guarantee progress upon their return.

Republicans are not only fighting against Democrats in Congress, but against themselves as various conservative senators have vastly different ideas about the direction of the Republican Party. This divide is making it difficult for constituents to believe that any progress will be made after the senators get back from recess.

This week’s vacation is coming at the end of a string of unsuccessful attempts to accomplish goals that have been around for a very long time. There is already difficulty getting major donors to continue giving the GOP their money. This will not help. It sends a message that time off is more important than passing tax reform.