Karl Rove Gets It Wrong on ObamaCare Defunding 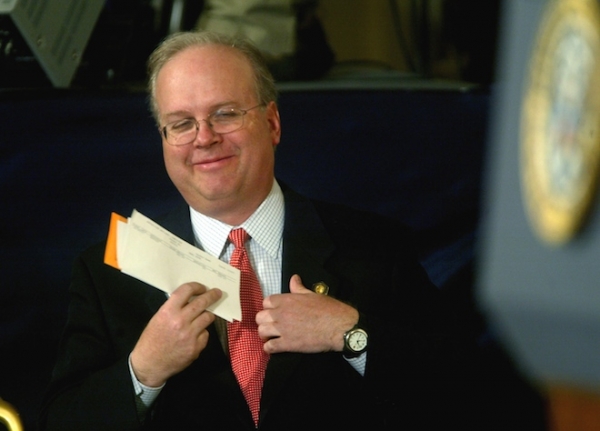 Karl Rove has a piece at FoxNews titled "Republicans must resist game of chicken with president over ObamaCare." In it, the establishment's favorite political guru dispenses bad advice to grassroots conservatives, based on the assumption that defunding the health care law on a spending bill "won't work." He's wrong about that.

Mr. Rove asserts that Republicans shouldn't try to defund ObamaCare on the CR, because:

... the Continuing Resolution only affects discretionary spending. [Whereas, v]irtually all of ObamaCare costs are mandatory spending, unaffected by what’s in the CR.

Defunding ObamaCare in the CR would not affect spending for the expansion of Medicaid, which is almost half of ObamaCare’s cost. Nor would it affect the Exchanges – the subsidies for insurance coverage – that’s also mandatory spending. In fact, as little as 1% or 2% of ObamaCare’s outlays for the first ten years would be affected by adding to the CR a provision defunding ObamaCare.

That would be a valid argument, if its basic premise were true. But it isn't. What the "Don't Fund It" coalition (led by Senators Mike Lee, Ted Cruz, Rand Paul, and others) is proposing is that all ObamaCare funding -- including auto-pilot spending -- be cut off by means of a legislative "rider" containing specific prohibitory language forbidding any ObamaCare funding from occurring. This rider would be attached to the CR, widely regarded as a "must-pass" measure.

The following "defunding" language is taken directly from Sen. Cruz’s bill, S.1292, to which the identical House counterpart is Rep. Tom Graves's bill, H.R.2682. Note the words in bold:

(a) In General- Notwithstanding any other provision of law, no Federal funds shall be made available to carry out any provisions of the Patient Protection and Affordable Care Act (Public Law 111-148) or title I and subtitle B of title II of the Health Care and Education Reconciliation Act of 2010 (Public Law 111-152), or of the amendments made by either such Act [i.e., ObamaCare].

(b) Limitation- No entitlement to benefits under any provision of the Patient Protection and Affordable Care Act (Public Law 111-148) or title I and subtitle B of title II of the Health Care and Education Reconciliation Act of 2010 (Public Law 111-152), or the amendments made by either such Act [i.e., ObamaCare], shall remain in effect on and after the date of the enactment of this Act, nor shall any payment be awarded, owed, or made to any State, District, or territory under any such provision.

(c) Unobligated Balances- Notwithstanding any other provision of law, all unobligated balances available under the provisions of law referred to in subsection (a) [i.e., ObamaCare] are hereby rescinded.

This language is clear and comprehensive. Enacting it would bring ObamaCare to a complete and permanent halt.

But let's assume, for the sake of argument, that Rove is right and the defunding language really will be limited to just discretionary spending. Even then, he is wrong in assuming it would affect only "one or two percent" of ObamaCare.

As the nonpartisan Congressional Research Service (CRS) has explained, the Department of Health and Human Services (HHS) and the IRS "will incur substantial administrative costs to implement the law’s private insurance reforms," including the massive exchange subsidies, "and its changes to the federal health care programs," including the massive Medicaid expansion. These administrative costs "will have to be funded through the annual discretionary appropriations.” (Emphasis added.)

What that means is if Congress should now decline or fail to appropriate additional discretionary funds, the bureaucracies won't have the funds they need to issue further regulations, make further policy decisions, or, presumably, to cut the checks to individuals in the exchanges and checks to states under the Medicaid expansion.

In other words, Rove is mistaken even on his own terms.

But just in case there's any doubt about the bureaucracy's ability to cut those auto-pilot checks, the rider language absolutely forbids it.

Note: If OMB declares these activities to be "essential" government functions, then it is possible that they will continue during a slowdown of nonessential government services (which is really what a "government shutdown" is).

Some may try to come to Rove's rescue by pointing out that in 2010 Congress (then under Democratic party control) gave the Administration a billion-dollar pot of cash with which to implement the president's health care law. Presumably, that money could tide them over for a while? Nope. HHS reports that that money is now mostly spent.

Because Mr. Rove's basic factual assumption is mistaken, his tactical advice is suspect.

After reviewing this entire file and listening to Mr. Clancy discuss why "DEFUNDING" is the right step, I've completely shifted my position, and signed the "DEFUND" petition. This law is even worse than I had heard (30 million permanently left uninsured), (no fraud detection,allowing people to self-certify income), (loss of catastrophic limit on each policy),(higher insurance premiums on every policy) there is no way young people will sign-up for for this abomination. Time to defund now .

I lost respect for Karl Rove many moons ago. Defund!!!