Keep the Bureaucrats Out of Preschool 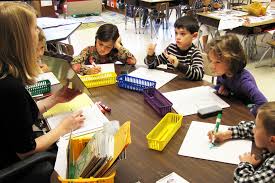 Early childhood schooling has become an increasingly important element of the national debate over the federal government’s role in education. The years before kindergarten can have a strong influence on our children’s development into productive members of society. With this in mind, President Obama has prioritized Race to the Top and the creation of a federally funded, universal preschool program. In his budget proposal for 2015, the president requested a whopping $750 million for his pet project.

It’s a pattern we’ve seen time and time again. Central planners who think they know better than parents assure us that education can be improved by throwing more money at it. They claim that more universality and more federal control will somehow make our children smarter.

The trouble is, like so many items of liberal mythology, the evidence doesn’t support these conclusions. Every federal education program to date, from No Child Left Behind to Head Start to Common Core, has been an abject failure.

[Read more from Matt Kibbe on why Common Core is doomed to fail.]

Let’s start with the disaster that is the Head Start Program. Despite being entrenched in federal bureaucracy for nearly half a century, this early childhood education program fails by its own admission to produce measurable results by third grade. Independent analyses of Head Start have found similar results.

Progressives are quick to counter that more money, along with more rigorous federal standards, will solve the problem. Apparently the $180 billion that Head Start already received is not enough. While so-called “high quality” preschool programs in Boston, New Jersey and Tulsa claim to achieve very strong results, there are serious methodological flaws with the studies used to evaluate these programs. A very similar program in Tennessee, using a properly randomized trial, found no such results.

In Oklahoma, where a state preschool program was enacted in 1998, taxpayers fork over an average of $7,400 per child for “free” early childhood education. What has been the result? Reading proficiency has remained unchanged over the last 20 years, while Oklahoma’s test scores have dropped from above the national average in 1998 to four points below the average today.

Democrats claim to be the party of science. The president says that he isn’t interested in partisanship, but only in doing “what works.” If that is true, then I urge them to take another look at the facts. Race to the Top, universal preschool and any other educational programs with federal standards and funding do not work.

The fact that liberals continue to aggressively push for these policies with no evidence of their value really calls into question the sincerity of those driving the issue of federal education standards. If not the kids, who stands to benefit?

Universal preschool appears to have very little to do with actual preschoolers, and more to do with expanding federal power and cozying up to teachers unions. It’s a monument to the arrogant bureaucrats who think they know more about raising your children than you do.

This worry is compounded by some of the actual provisions included in the president’s proposal, including “voluntary” home visits by social workers to check up on your children. If the White House’s definition of “voluntary” is anything like that used in the Common Core standards, acceptance will likely be tied to grant money for states. This is just another excuse to give bureaucrats more power to undermine parents’ rights.

It is well documented that the government’s track record on education is abysmal. Now they are asking families and parents to fork over more money to pay for a program that’s been proven not to work. Control over education should always remain at the local level and free from federal mandates, standards and funding. The evidence shows that children in less centrally controlled educational environments have better education outcomes.

For decades, our children have been subjected to a failed and corrupt federal education bureaucracy. We need take a stand, as parents and as American citizens, to demand a stop to more of the same. The only equality that a universal preschool program would bring to young students is an equal performance of mediocrity.

Vote up the article in the U.S. News poll