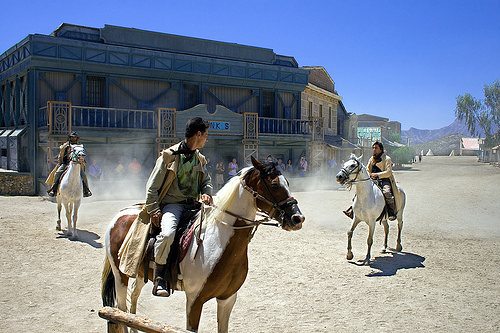 Them government varmits are trying to rustle our best businesses.

UPDATE 6-5-2014: In their continuing efforts to ruin all that is good and decent in the world, the Virginia Department of Motor Vehicles has sent cease and desist letters to two car service companies, Uber and Lyft, operated through mobile apps. While these services provide safe, efficient, and affordable options for people to get from point A to point B, the DMV apparently thinks it is more important to protect the oligopolies of cab companies, not to mention their own revenues, than to allow consumers to buy services they overwhelmingly enjoy.

The advent of smartphones, social media, and GPS navigation has opened up a world of possibilities never before dreamt of in human history. In times past, the average citizen lacked the resources and the organization to accomplish most tasks without the help of trained professionals, without middle men who were able to charge a premium for their expertise.

Now, all that is changing, and middle men are fast becoming a dying breed. An astonishing number of mobile apps have sprung up to connect consumers directly with producers, streamlining the cost of doing business and encouraging a vibrant community of competition and innovation.

The car service Uber has freed commuters from the tyranny of strictly regulated and monopolistic taxi companies. Social dining apps like Grouper or SupperKing are connecting those who like to cook with those who like to eat facilitating impromptu dinner parties with former strangers (and future friends!) And in New York City, a company called Airbnb has come up with a way to provide affordable lodging for travelers by allowing “hosts” to temporarily rent out their apartments to weary strangers.

But not everyone is celebrating these innovative new technologies. Regulators and business lobbies alike are banding together to attempt to crack down on what they view as a threat to the existing order. New York attorney general Eric T. Schneiderman has issued a subpoena to Airbnb demanding they release the names of their registered hosts, citing a 2010 city law that prohibits individuals from renting out apartments for periods of less than 30 days. This comes as lobbyists from major hotel chains are lining up against the company for cutting into their business.

Understandably, Airbnb is fighting the subpoena, arguing that their clients’ information is confidential and that having to disclose it would violate their rights. Airbnb has also requested a new set of regulations tailored to their business model, since the internet has vastly changed the calculus of how business is done and has rendered the old regulations largely inappropriate and obsolete.

Hostility towards novelty is nothing new, but it’s a little ironic coming from regulators and organizations that ally themselves with political progressives. You would think that a movement that names itself after progress itself would be the first to embrace technological innovation.

As things stand, attempts to dismantle new business models using the force of regulation are just one step removed from the original Luddites physically destroying the mechanical looms they viewed as a threat to their livelihood. The use of court orders instead of hammers and axes is only a minor distinction.

The beauty of this flourishing new market lies in the incredible disintermediation that allows anyone with a good idea to start a business. There is no need for massive amounts of initial capital. There are no barriers to entry. The internet allows the population as a whole to throw their ideas against the wall and see what sticks. The result is a market discovery process where businesses that work are allowed to thrive unhindered by restrictive and anticompetitive regulations.

Laws need to be adapted to suit new technologies. It makes no sense to apply regulations to automobiles when they were written with horses in mind. It is wrong to hold the flourishing world of e-commerce to standards that were designed for the era of television and radio. You can’t stop progress, but you can delay it, and in so doing engage in unjust protectionism on behalf of powerful incumbents.

The internet is the purest example of what F. A. Hayek called “spontaneous order." By giving these businesses the freedom to experiment and develop, we encourage the flowering of human ingenuity. By knocking them down with strict regulations, we crush the innovative spirit that made this country great in favor of regressive protectionism.

There is plenty of room in the market for new business models. Let’s give them a chance to work.