King v. Burwell: Words Have No Meaning if Inconvenient 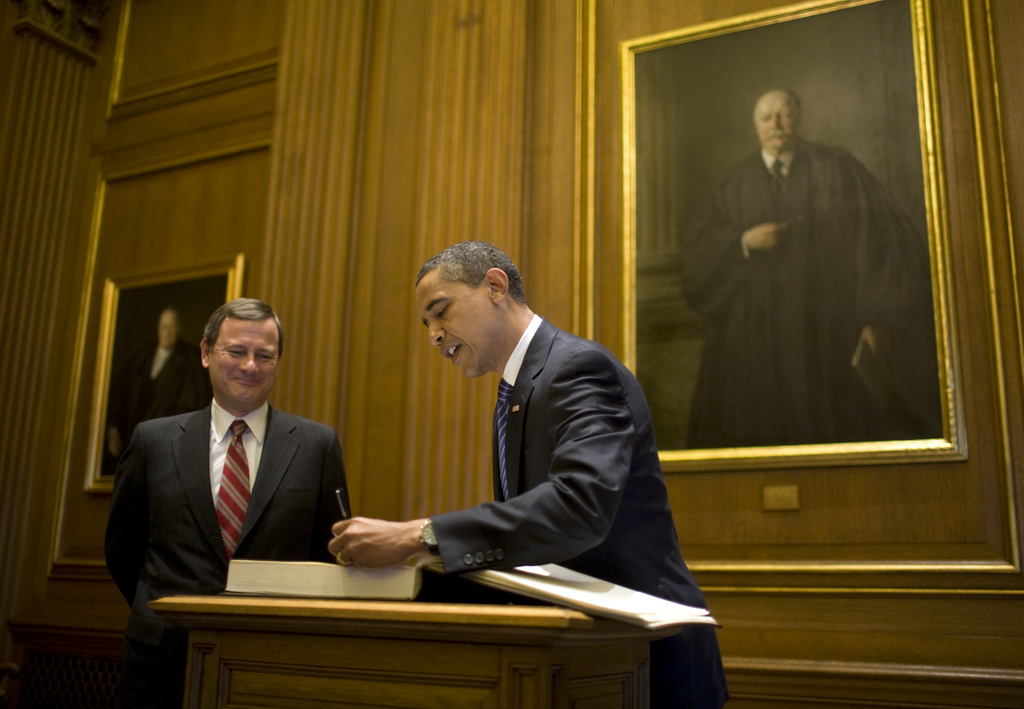 Some words apparently have no meaning, even when written in plain English, according to a majority of Supreme Court justices. Today the Court reached its long awaited decision in King v. Burwell. The Court ruled 6-3 for Burwell, holding that the federal subsidies can continue to flow to states that have not established an exchange.

Whereas most Americans see plain meaning in the words “established by the states,” Chief Justice Roberts saw ambiguity. Writing for the Court, the Chief Justice wrote that the law was not clear, but that the intention of the law was to improve health insurance markets, not destroy them. Much of his opinion was focused on protecting ObamaCare from a “death spiral.”

This is the second time the Chief Justice has mounted his horse to ride to the defense of the troubled health care law, ObamaCare. He seems to be under the belief that one of his roles as Chief Justice is to defend an unpopular law that is destined to fail.

This fact has not escaped the attention of Justice Scalia. In his dissent, Scalia said that we should start calling ObamaCare, “SCOTUSCare.” At the end of his dissent, Scalia wrote, “[t]he somersaults of statutory interpretation they have performed (“penalty” means tax, “further [Medicaid] payments to the State” means only incremental Medicaid payments to the State, “established by the State” means not established by the State) will be cited by litigants endlessly, to the confusion of honest jurisprudence. And the cases will publish forever the discouraging truth that the Supreme Court of the United States favors some laws over others, and is prepared to do whatever it takes to uphold and assist its favorites.”

It is not the role of the Court to protect poorly written law or delve into what the intent of Congress was. The role of the Court is to uphold the rule of law by looking at the text of laws and determine their constitutionality, and whether an agency has gone beyond its authority.

Here the IRS was told to give subsidies to qualified individuals who purchased health insurance from an exchange “established by the states.” The IRS went beyond their authority and granted subsidies to people who also purchased health insurance from the federal exchange. Today six justices of the Supreme Court granted legitimacy to this unlawful action perpetrated by the IRS.

Even with this decision, ObamaCare is still a troubled law. Premiums are soaring in many states, and deductibles were also high. Not enough young people are purchasing insurance which will cause prices to rise even higher in the coming years. This decision does not so much save ObamaCare, but delay its inevitable failure. The victory will be that much sweeter once “we the people” are able to defeat the law, not through the Court, but by a grassroots uprising.

Justice is supposed to be blind, and from this decision, apparently so are some of the justices. With the Court working its hardest to protect the law, it falls on “we the people” to bring about ObamaCare’s end.

Once again, I'd like to share my take regarding the lawlessness handed down to us by the Supreme Court last week regarding Obamacare:

Obama's claim that the "legislative language was written improperly to imply state based exchanges must be set up for people to receive Obamacare subsidies" is total BS. The intent of the law WAS to mandate all states to set up exchanges, but that changed when the Supreme Court ruled that states could not be forced to do so; they were given a choice to opt out if so desired. That ruling changed the intent of the law, but not the law as it was written, leaving the legislation clearly stating that subsidies would only be available "through the state."

While Obama continually blamed the states that chose not to set up exchanges, it was, in fact, the Supreme Court that gave them that choice. He's been trying to have it both ways by lying about the original intent of the law. It was not an "oversight" or "written improperly" as he has claimed.

Unfortunately, my point of view was never addressed before the Court as far as I know, and I can't understand why. I think it could have made a difference in the outcome (although it appears that Roberts' decision had a lot more to do with politics than the original intent of the law.)

The Supreme Court, & the IRS are supposed to be non partisan, but they are now an instrument of the liberal democrat party. They do not care what the law says anymore. Justice Roberts has been a unbelievable disappointment. I don't know what happened there. Of course the republicans claim they will fight to get rid of Obamacare, but every time there is an opportunity to they back down & claim they will do something next time. The republicans are always sending e-mails requesting donations stating they are going to fight Obamacare, but they don't seem to realize no one believes them anymore. The republicans will not be believable on the issue of Obamacare until they get new leadership in the house, & senate.

Once again SCOTUS fails to do the job of interpreting law, instead rewriting it. Their last decision to uphold the individual mandate penalty as a tax, further invalidates OCA. As all congressional tax bills must originate out of the House of Representatives. This bill was written in the Senate.