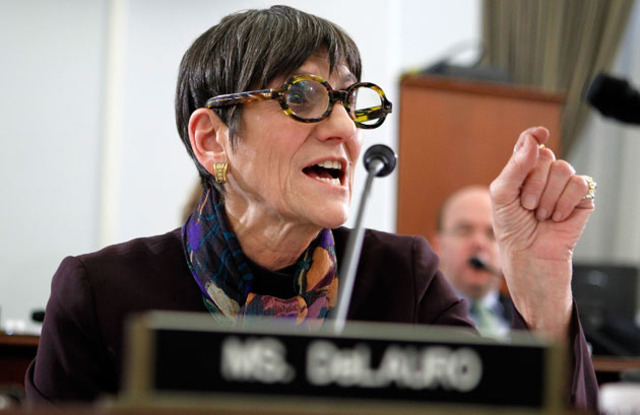 Enter Rosa DeLauro, a Connecticut congresswoman who thinks what we eat and drink is her business. This enterprising Democrat has taken it upon herself to draft legislation levying an additional excise tax on sodas and other sugary drinks, which she describes as doing “serious damage” to our health.

First of all, the government—federal or otherwise—has absolutely no business interfering in the consumption choices of individual citizens. No one is laboring under the idea that massive amount of sticky sugar water is great for you, but there are plenty of people who consume soft drinks in moderation without damaging their health in the slightest. By now, everyone understands the tradeoffs they are making when they drink soda instead of water, and they should be free to make those tradeoffs without the meddling hand of government interfering, just as they should be free to consume alcohol, or tobacco, or any other legal substance.

But health is the new religion of the left, the one thing for which it is worth sacrificing all freedoms. The progressive mindset holds that no one should be allowed to damage their own health, and if it takes taxes, fines, penalties, or even jail to keep them in line, so be it. It’s the same pattern of medieval inquisitions, where ensuring salvation for heretics was considered so important that a little torture was a small price to pay. Thankfully, the church has since embraced free will and individual choice, but progressives have been more than happy to fill the paternalistic vacuum by substituting bodily health for God.

Legislation like this is one of the many reasons so many of us feared and resisted a state takeover of health insurance markets a la ObamaCare. When everyone is responsible for everyone else’s health care, collective health becomes everyone’s business. If I have to foot the bill for your obesity, diabetes, and heart problems, I have an incentive to become bossy with respect to your eating habits. That’s why a market in which everyone pays his own way is essential if we want a free society that preserves individual choice.

The irony here is that the policies pushed by Rep. DeLauro and her Democratic colleagues are partially responsible for the problems she claims to want to solve.

“When a two-liter cola is 99 cents and blueberries are over three dollars,” said DeLauro, “something has gone very wrong.”

Why does such a price differential exist, I wonder? Part of it is because government subsidizes corn, from which the dreaded high-fructose corn syrup is made. Soda used to be made with good old fashioned, nutritious, delicious cane sugar, before lawmakers decided to artificially lower the price of corn disproportionately as a favor to agriculture lobbies.

Then there’s the violently elitist, anti-science push to regulate GMOs (repeatedly shown to be absolutely harmless, while resulting in more food at a lower cost) and advocate for organic produce, which is much costlier than conventional agriculture.

Embracing modern agriculture techniques could bring the price of those blueberries down and make for a healthier America, but Democrats would rather punish consumers instead for not adhering to their personal opinions of what constitutes a healthy lifestyle.

The tax code, as outlined in the U.S. Constitution, exists for one purpose, and one purpose only: to raise revenue to finance the essential functions of government. It should never be used to try to manipulate citizens into behaving as politicians think they ought to behave. It is not the place of lawmakers to impose their personal values on the rest of us, nor to strip away our choice of what to consume in a free, legal market.