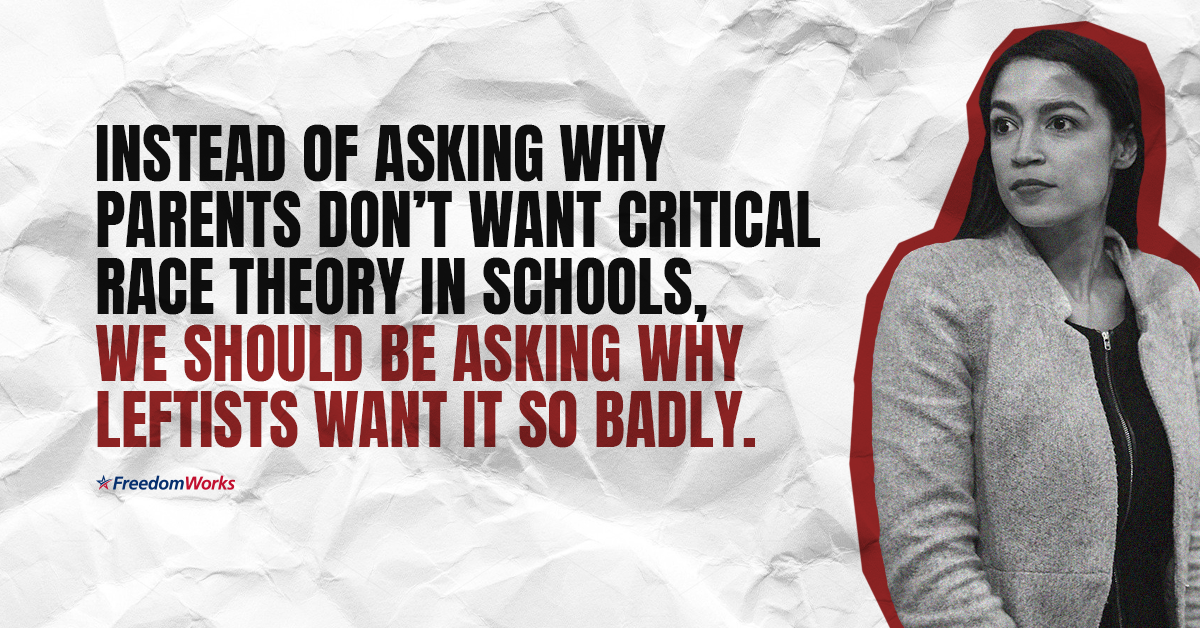 I taught history in Poland soon after the collapse of the Soviet Union. My students were eager to learn objective truth--something which the Soviet regime abhorred. When I look at the fight over Critical Race Theory (CRT), it reminds me of the party-approved curricula that my students’ parents remembered from the days behind the Iron Curtain. Like the Soviet Ministry of Education’s dogma, CRT is blatantly ideological. It’s no wonder CRT’s proponents are intent on muddying the waters with bad faith arguments.

And that’s exactly what we saw from Rep. Alexandria Ocasio-Cortez’s interview with CNN’s Don Lemon last week. When asked about the pushback against critical race theory, the New York City Congresswoman replied: “Why don’t Republicans want kids to know how to not be racist?”

Parents like myself are stunned by Ocasio-Cortez’s ignorance. Aside from sounding like an activist college student who has yet to reconcile with reality, Ocasio-Cortez reverts to a common straw-man argument. She contends that parents and Republicans don’t want their kids to learn about racism or the history of it in this country. What she is responding to, however, is an argument entirely different from the one reverberating across the country.

No one is asking for schools to not teach about slavery and Jim Crow, or shy away from any other painful parts of our history. What parents are asking for is that critical race theory, a divisive sociological ideology that stands opposite of the West’s liberal tradition, does not become the lens through which all of history and social interaction is contextualized—especially when it comes to teaching kids in K-12. Teaching the painful parts of history shouldn’t be controversial, but it also falls on parents to raise their children to be good people who treat their fellow Americans with the dignity and respect they deserve. This is dangerous to the Left’s agenda.

Adherents to CRT must believe that white people will always be complicit in racism against non-white people regardless of good intent. In other words, Ocasio-Cortez wants children to be taught to judge each other by the color of their skin. We also have to remember that CRT is not truth—it’s theory. And when it comes to the humanities and soft sciences, it’s not standard to take theories as hard facts or build an entire curriculum based on them. There are plenty of academic theories that exist, but that doesn’t mean we start basing kids’ classes on them. Instead of asking why parents don’t want CRT in schools, we should be asking why leftists want it so badly.

It’s no secret that one of the aims of Soviet education was to consolidate all learning in the hands of the state. CRT’s activist approach to teaching history aims to achieve a similar end. Ask parents if they think that morality should be left up to schools to teach, and you will gain all the clarity you need about why parents across the country are organizing to defeat CRT.

Not only should parents be stunned by the congresswoman’s ignorance, but they should be insulted by what her remarks suggest. Implied in her argument is that parents are incapable of teaching their own kids about racism. Apparently, the only way to get kids to understand the immorality of treating people differently based on skin color is to get the government and CRT-trained teachers involved. Ironically, though, CRT would teach students that skin color is suggestive of a perpetual societal power struggle rather than an accident of birth.

But even with the challenges mounting, there is enormous grassroots energy in opposition to CRT. Parents know that they don’t have to put up with CRT in schools and that they can be change-makers by showing up to local school board meetings, running for school board, or pulling their kids out of public schools. How the CRT battle fares on the local level will determine its course nationwide. Politicians like Ocasio-Cortez should know that there’s no better fighter for our nation’s children than a concerned parent. But that may be too much for a product of today’s higher education system to realize.