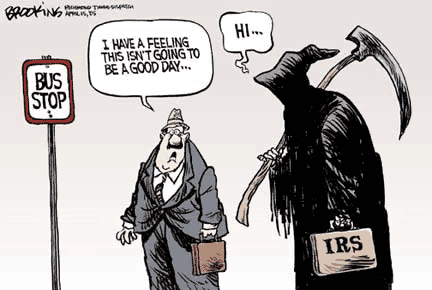 A decent definition of a “chief principle” is the bedrock value of an ideology, i.e., being willing to relinquish all contradicting values to attain this chief value. The death tax is the perfect example of why equality of outcome, or equality generally (not just in value and rights), is such a faulty principle to undergird an ideology.

According to a study by the Heritage Foundation less than 2 percent of all income inequality is a result of inherited income. On the flip side of the token, eliminating the death tax would result in 18,000 more private-sector jobs annually and would add $46 billion in growth over 10 years due to investment. In other words, the left’s yearning for equality of outcome by reigning in inequality by 2 percent leaves 18,000 individuals jobless and $46 billion out of our economy.

Sometimes creating more wealth for all directly contradicts with the value of equality. As John F. Kennedy said “a rising tide lifts all boats.” Thus, equality as a chief principle necessarily indicates scenarios which lower the tide in hope that the largest boats sink deepest.

This is certainly the case in the death tax.

Many on the left would claim that the vast majority of that $46 billion will go to the rich. Aside from the vast middle-class jobs created due to investment, this may be nominally true. But what is nominally true, or what amount of currency is distributed to whom, is almost entirely irrelevant. What is relevant aggregate valuable possessions individuals can afford with their nominal currency, or their wealth.

The 1 percent with their expendable incomes can invest in this way. The iPhone would not have been created, and made affordable for nearly all Americans, without a top 1 percent buy the first very expensive mobile phones and willing to invest in cheaper modes of production. Redistributing money from the top 1 percent into social programs is a much less effective method of increasing wealth of lower class Americans than investing in agricultural technology making agricultural products cheaper.

This is not to say that equality is an entirely futile value. Certain inequalities, unjust inequalities, should be relentlessly pursued and resolved. The most glaring examples of unjust inequality is made apparent when a public servant, or family member thereof, makes off like a king or queen through crony deals. See Hugo Chavez’s ambassador daughter, who has $4.2 billion in assets and Hugo Chavez’s Treasury Minister, Alejandro Andrade who has over $11 billion in assets while their people starve. What enables this type of cronyism - of course - is the slimy hands of big government rooted in the people’s pockets.

The estate tax is much more nuanced than the altruistic takedown of the rich the millionaire leftist politicians would like you to believe. It is a populist cry for class warfare that is causing harm to low and middle class Americans, 18,000 of them precisely. How easy it is to blame “the rich” for bad policy, undergirded by the faulty principle of equality.