"Liar!" "Liar!" Your Rights Under Fire 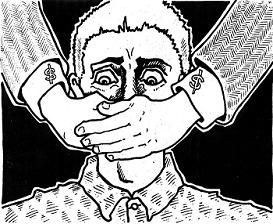 Freedom of speech in America has been held to a higher standard as a fundamental right since the beginning. Before the country was even established, a precedent was set forth in the Colony of New York in 1735 that would forever allow people on this side of the pond more liberty with their tongues than those over in England.

John Peter Zenger, a printer and master of his trade, came under suit for spreading libel in his newspaper. When he was brought to court, the jury ruled that Zenger was not guilty of any charges, a groundbreaking decision for the soon-to-be American code of law. Unlike England where innocence of slander or libel was based on the actual truthfulness of the words, the American jury made their ruling based on the actual right of someone to print the information. This challenge to the English way of approaching freedom of speech established the foundation for our uniquely protected right of speech today.

Fast forward nearly 200 years and this precedent was challenged in a whole new light – in the time of a World War. Along with the war came the introduction of the draft and in protest against it, a man named Charles Schenck took action into his own hands. Spreading anti-draft flyers encouraging peaceful resistance of the Conscription Act, he was called to court by the United States under the charge of conspiracy against the government and violation of the Espionage Act. The worst part – the Supreme Court found Schenck guilty. The ruling resulted in a new limitation on freedom of speech by determining that speech presenting a “clear and present danger” needs to be restricted, or better yet, shut down.

Reading between the lines, your rights change in times of war. So much for them being fundamental, universal, and unalienable.

This decision was a major attack on one of the greatest (or arguably the greatest) rights Americans hold within our parchment barrier. Luckily for us, another case made its way on the docket to define this right once again and the Supreme Court grasped at the opportunity.

In 1969 Brandenburg v. Ohio set the rights record straight again. An Ohio law was on the books that prohibited any language advocating “crime, sabotage, violence, or unlawful methods of terrorism as a means of accomplishing industrial or political reform” or the gathering of any group centered around “doctrines of criminal syndicalism.” Under this law, a member of the Klu Klux Klan was convicted but appealed the case to the Supreme Court. The Court ruled the Ohio law unconstitutional and therefore void.

Through this ruling, the Supreme Court set boundaries around the First Amendment by establishing that speech is only illegal if it explicitly produces or is likely to produce “imminent lawless action.” This clarification reigned in the broad overthrow of the freedom of speech made by *Schenck v United States *and clearly highlighted the American ideal that even if you don’t like someone’s opinion, they still have the right to express it. It also gave a clear signal to state legislatures that their laws cannot overwrite the fundamental liberties laid out in the Bill of Rights.

There is no doubt in my mind (and there should be little in yours) that cases will arise in the future that are destined to be either make or break moments for the First Amendment. Although the rights in the First Amendment are some of what the Founders argued to be man’s natural rights, government and society will continue to push against these parchment barriers in order to break down the restrictions they place on their powers over you and me.

Today the fight continues with S.J. Res. 19 which was passed by the Senate Judiciary Subcommittee on June 18th. Heard of it? Deemed as a tool needed to make elections more fair and equal, this resolution attempts to pare back the First Amendment when it comes to elections by placing restrictions on how campaign funds can be spent. The connection between speech and money comes with the realization that everything from posters, pamphlets, yard signs, websites, television ads, and more costs money. As Senator Ted Cruz said, “If you can prohibit spending money, you can prohibit virtually any form of effective speech.”

Ultimately, this resolution is a self-serving form of incumbent protection. By placing restrictions of freedom of speech through the means of cutting off its funding, this proposed Constitutional amendment leaves the people who are already in the national spotlight with the advantage. New challengers to the field are stopped in their tracks simply because they can’t spread their name around, let alone their ideas.

The fight for the First Amendment will never be over, which makes it even more important that you exercise the very right that we’ve been talking about. That a proposed constitutional amendment such as this is up for debate signals an ideological shift happening in our country. Don’t let ignorance be the death knell of your rights. Educate yourself on what is happening in the courts. Ask questions about what “fairness” really means and take action by spreading the word.

Ironic. If there's any party that needs to re-read some of the most basic contents of the first amendment, I'd say the entire GOP needs to take a stroll down their nearest library and take a glance because some of the things that comes out of their mouths would suggest they lack significant knowledge of that particular amendment.

There is a dangerous trend of free speech infringement by the government across the board, but none are so egregious and directly violative of individuals' rights as what is happening in the Family Courts across the country. Few courts are so intimately in control of everything a person is and has. Public attention needs to be raised on this trend: