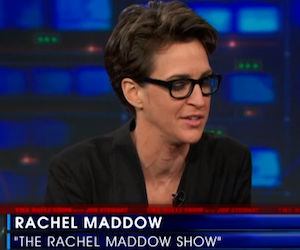 Maddow is crying foul even before the votes are cast.

As we enter the home stretch of the midterm elections, Democrats’ chances of holding the Senate appear to be fading, and commentators on the left are beginning to panic. Abandoning honest analysis in favor of conspiracy theories and allegations of bias in the polls.Particularly egregious in this regard is the always excitable Rachel Maddow, whose plummeting ratings have apparently driven her to desperation.

In a recent report, Maddow, after noting that the Senate elections are essentially tied (debatable, but we’ll let her have that one), took a dramatic left turn into conspiracy land, warning that Republicans are likely to steal the elections through voter suppression efforts. Looks like someone has been faithfully attending her spin class.

Preemptive accusations of Republican cheating, with zero evidence, coming from a network that pretends to report the news, is pretty ridiculous. If Republicans were any good at stealing elections, would Barack Obama have been elected twice, and would Harry Reid have been able to hold onto the Senate for the past seven years?

If Republicans had any talent or inclination to steal elections, we would expect to see them performing better on Election Day than previous polls predicted, wouldn’t we? But Nate Silver, who is respected across party lines for his rigorous analytical methods, has pointed out that in the last two cycles, Republicans underperformed compared to pre-election polling. This is not consistent with a party that systematically suppresses votes or rigs elections.

In fact, the most credible evidence we have for actual voter fraud in recent years comes from Democrat Al Franken, who won his Minnesota seat in 2008, after multiple recounts, by an incredibly narrow margin of just 312 votes. After the election, it was discovered that, in two counties alone, the number of convicted felons voting illegally in the election exceeded Franken’s margin of victory. And let’s not forget the extensive fraudulent voter registrations coming from the liberal group Acorn in that same year.

Democrats should be very careful in crying about voter fraud, lest their own activities come under more scrutiny. They might just end up getting those voter ID laws they have so vehemently opposed. For now, however, Maddow comes across in much the same light as Karl Rove, throwing a tantrum on live television in 2012 after refusing to accept the reality of the election results. This year, the results remain far from certain, but I would at least hope that Democrats would have used this incident to learn something about losing gracefully.

Despite what the media would have you believe, voter fraud and intimidation is often used as a tool by the Democratic Party machine. Last night I was tipped off to a disturbing incident, which occurred in Dallas, Texas. I assure you this is not an isolated case.

Voter fraud is a contentious issue of late; liberals swear it is a myth propagated by evil racist conservatives. We know better. Most on the right are aware of the voter fraud issue but many have little to no idea how to combat or report violations; consider this your crash course.

Securing the Vote: Lessons from 2010

I was a poll watcher in Bridgeport, CT in 2010. For those of you not familiar, the Mayor of Bridgeport set off a recent firestorm by promising to swing the 2012 U.S. Senate election for Democrat Chris Murphy. How can he do that? Let me tell you what happened in 2010.

It was just a few months ago that Fox News contributor Juan Williams was following the lead of his liberal media cohorts in pretending that voter fraud was a non-existent phenomenon.  He brushed the concept off as nothing more than an attempt to suppress Democrat voters in general, and minority voters more specifically.  Williams called GOP demands for voter ID laws a "fictional controversy", the equivalent of "yelling 'fire' when there is no fire".