Life and Energy Find a Way

“Life always finds a way” is as tr 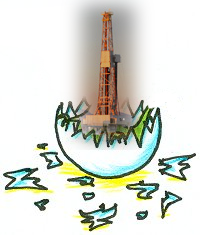 ue in today’s real world as it was in Jurassic Park. Life requires energy to exist and New York state has come to realize this. Governor Cuomo of New York is set to lift the state’s de facto ban on hydraulic fracturing, or “fracking”, allowing this energy industry to revitalize the state.

Fracking has not been allowed in New York State due to an official moratorium and de facto ban. According to Rich Bennett, of the New York State Department of Environmental Conservation’s (NYS DEC) Bureau of Public Outreach, New York State had a fracking moratorium in place, but the legislature has not voted to renew it, allowing it to expire instead. Up until recently, Mr. Bennett explained, there have been no rules governing fracking in the Empire state. Governor Patterson, Cuomo’s predecessor, ordered an environmental report on fracking in 2008; that, combined with the lack of state fracking rules, has resulted in a de facto fracking ban.

Governor’s Cuomo’s administration, however, has reached a fair compromise between the fracking industry and state regulatory bodies. The NYS DEC recently released a draft report detailing their recommendations for fracking regulations.  The 2009 recommendations allowed for fracking in watersheds. Cuomo’s administration has proposed to “permanently ban fracking in the New York City watershed, located north of the city, and the Syracuse watershed. Aquifers in other parts of the state would also be off limits” as would state parks and other public land.  But with these regulations in place, that leaves an ample 85% of New York’s natural gas-rich Marcellus Shale open for fracking.

New York only stands to gain by allowing substantial and responsible fracking to operate within its boundaries. The Empire State can now partake in “one of the biggest energy booms [in] this century” . Governor Cuomo recognizes that the “the economic potential from the Marcellus Shale could provide a badly needed boost to” the state’s sagging economy.  The Manhattan Institute, a New York based think tank, estimated that fracking operations could inject $11 billion into New York’s economy.  Pennsylvania has seen a large jump in jobs and government revenue due to fracking, so it is a fair guess that New York will also see an increase in employment.

The Cuomo administration is helping the people of New York fulfill their critical need for reasonable and reliable energy by moving to lift the de facto fracking ban. The NYS DEC will not release a complete draft of their recommendations until August, when it then will be open to public comment for 60 days.  While the process is wrapping up, the first fracking permits may not be granted for another year, according to Mr. Bennett. But New York seems to be on the track to frack. Not only should we congratulate Governor Cuomo’s administration for moving to lift the fracking ban, we should take the Empire State as an example, allowing a more reasonable approach to the issue to bringeconomic prosperity and independence to one energy starved state at a time.