Life, Liberty and the Pursuit of Big Gulps 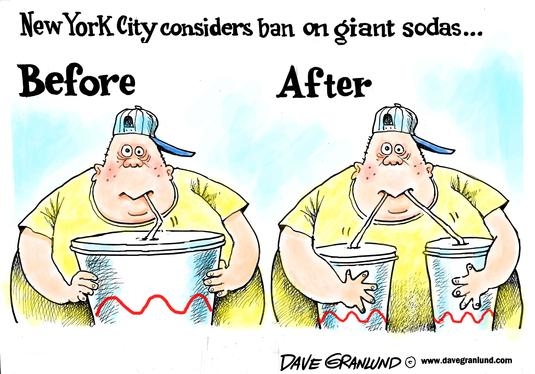 Earlier today, the First Department of New York State's Appellate Division upheld a ruling that struck down Mayor Bloomberg's controversial portion cap rule or "soda ban." The ban would've prohibited movie theatres and other restaurants and eating establishments from serving specific sugary beverages in quantities larger than 16 ounces. Of course diet sodas were exempt and patrons would still be able to purchase multiple 16 ounce beverages, but logic, or something...

The unanimous decision by the Appellate Division stated, "the Board of Health failed to act within the bounds of its lawfully delegated authority. Accordingly, we declare the regulation to be invalid, as violative of the principle of separation of powers." Ouch.

Unlike the prior ruling which found the portion cap rule to be, "arbitrary and capricious," the Appellate Division did not dive into this issue. Rather they vetted whether or not the New York City Board of Health amending a rule with wide reaching ramifications crossed into legislative authority. The Appellate Division did take the time to express their concern that the portion cap rule, "necessarily looks beyond health concerns, in that it manipulates choices to try to change consumer norms."

Had the rule change sanctioning the portion cap rule remained in tact, countless small businesses might have suffered. The NAACP New York State Conference and the Hispanic Federation alleged the portion cap rule would, "selectively and unfairly harm small and minority-owned businesses by discriminatorily preventing them from selling large 'sugary beverages' while allowing their large competitors such as 7-11 and grocery stores to carry the banned sugary beverages," in an amicus brief. While the Appellate Division did not make any claims regarding minority owned business, they did recognize that the portion cap rule, "resulted in a ban that includes exceptions which necessarily favors some businesses and products at the expenses of others."

Bloomberg insisted “today’s decision is a temporary setback, and we plan to appeal this decision as we continue the fight against the obesity epidemic.” Meanwhile, Bloomberg is urging Congress to prohibit the use of foodstamps for the purchase of sugary drinks.

I am glad to see that some lawmakers still have some common sense. It is hard for me to believe that a city would even waste time or money on this issue. If you follow this line of reasoning should a person have to bring in multiple ID's to prove that they have friends sharing the extra large pizza they just bought. Obesity is definitely an issue in America, but it is a person's responsibility to seek help if they suffer form being over weight.