State and local employees are paid more, on average, than private-sector workers about 13 percent more, according to this analysis by John Schmitt. But as Schmitt shows, that’s an apples and oranges comparison: state and local workers are much better educated and somewhat older than private-sector workers, and once you correct for that the comparison actually seems to go the other way.

In reality, government employees unnecessarily enjoy bloated paychecks. According to the Bureau of Economic Analysis, the average state and local government employee salary is $53,056 compared to private sector workers who average $50,462 annually. At first, this may not seem like a huge difference between their salaries. However, Paul Krugman fails to factor in various other benefits of government employment.

In Krugman's recent column, he cites a study from the leftist Center for Economic and Policy Research that claims that educated government bureaucrats are actually “penalized” because of their “low salaries”. Yet, this study also fails to mention additional government benefits and pension plans. The USA Today chart below shows that the average state and local government worker receives 59 percent more in benefits than private sector workers: 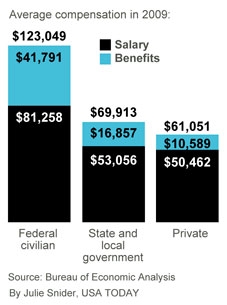 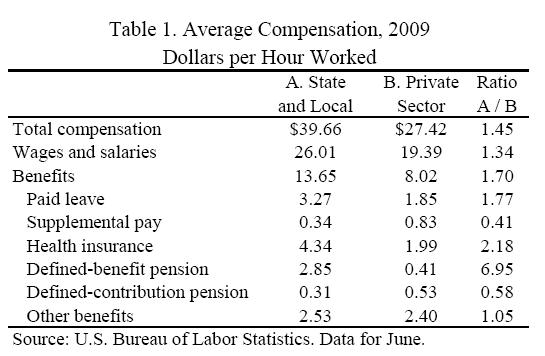 One of the main reasons that local and state government are in fiscal trouble is because they pay their employees way too much. Since public sector unions have a large influence on government policy, they are successfully able to lobby for excessively higher pay at the expense of taxpayers. Taking away massive amounts of money from the productive private sector to pay for government bureaucrats' bloated paychecks has deterred economic growth. It is unsustainable that a growing number of government employees are receiving far greater benefits compared to their private sector counterparts.

On behalf of FreedomWorks’ activist community, I urge you to contact your representative and ask him or her to co-sponsor the Drain the Swamp Act, H.R. 826, introduced by Reps. Warren Davidson (R-Ohio.) and Ted Budd (R-N.C.). The bill would require the heads of executive agencies to develop and implement relocation plans to move executive agencies outside of the Washington, D.C. metropolitan area.

Last week, Rep. Gary Palmer (R-Ala.) introduced H.R. 5499, the Agency Accountability Act. Congress provides funds to federal agencies to carry out specified activities through the appropriations process. Too often, these agencies engage in activities that Congress has not authorized and pays for them via fines and fees they collect. This practice is an end run around Congress and the will of the people. Rep. Palmer’s bill would curb this practice, help restore the oversight function of Congress, and send the money garnered by federal agencies through fees to the Treasury instead of allowing those funds to be used indiscriminately.