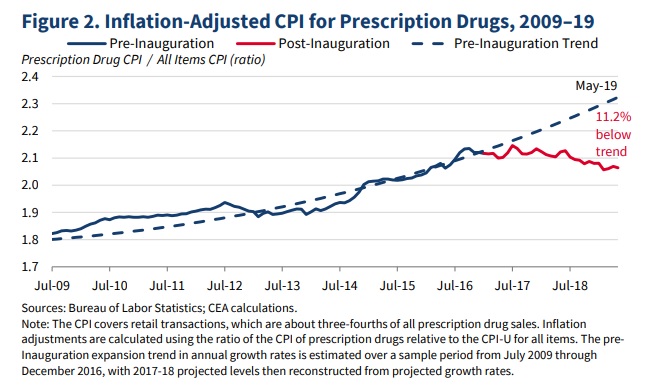 Prescription drug prices in America are out of control. On this, it appears nearly all Americans can agree. In order to address this pressing issue, many on the left have called for a new system of price fixing based on foreign drug prices that they claim would solve all of the problems. Yet, in their political calculus, these proponents of an international pricing index (IPI) and more stringent government regulation of healthcare seem to have discounted what has empirically been the most important tool we have. Rather than look far across the oceans to find a model to fix our problem, we need only to look inward to see what’s already working: deregulation.

When President Trump took office, his administration laid out a new regulatory strategy that places a heavy emphasis on deregulation. According to a report by the Council of Economic Advisors (CEA), the average number of “economically significant” regulations implemented per year was decreased by over 92 percent, from approximately fifty-three regulations per year between 2001 and 2016 down to just four per year under the Trump administration. Furthermore, the administration has been hard at work repealing dozens of existing regulations in an effort to cut red tape and open up industries to heightened levels of productivity and competition.

Not only has this deregulatory agenda benefitted Americans to the tune of an annual real income increase of approximately $3,100 per household, it has also spurred the first substantial decrease in prescription drug prices in recent memory.

For the last several decades, prescription drug prices have outpaced general inflation. This is the reason we are in our current predicament. Put simply, the average cost for prescription medication has been increasing far above what it should have been if inflation were the only factor. Luckily, that trend is shifting.

As demonstrated by Figure 2 from the June 2019 CEA Report on deregulation, as of May 2019, the consumer price index for prescription drugs has fallen to more than eleven percent below the projected trend line. Put another way, current prescription drug prices are over eleven percent lower than what they would have been had the Trump administration not instituted new deregulatory policies.

These policies, taken in conjunction with less comprehensive rule changes, have incontrovertibly demonstrated the power of deregulation. Although more needs to be done to rein in skyrocketing prescription drug prices, it is clear that European style price controls are far from the proper approach.