Make no mistake, this is no longer a Washington where President Obama is always in charge. On Capitol Hill the man in charge is Harry Reid. No question about it.

President Obama has handed over the reins of leadership on government funding and the debt limit to Senate Majority Leader Harry Reid (D-Nev.).

Reid is now fully in charge of his party’s negotiating strategy, a significant change from past showdowns with Republicans.

The Senate Majority Leader has always been a rough and tumble kind of guy, he is after all, a former boxer. Reid believes that if he doesn't back down in the shutdown and debt-ceiling fight, that he will force Republicans to cave and pass a "clean" CR and debt ceiling increase. Part of Reid's strategy is to hurl insults at Republicans surely hoping the media will repeat them to the point that it becomes ingrained in the public's mind.

The majority leader has brought a more pugnacious style to the debate, bashing House conservatives as “anarchists” and mocking the “Banana Republican mindset.”

The Senate Majority Leader has also chastised Ted Cruz for his 21-hour attack on Obamacare, saying that the Tea Party is holding the government hostage. Read that as, "You crazies don't do what you're told! Do what I tell you! Establishment Republicans do it and you should too." 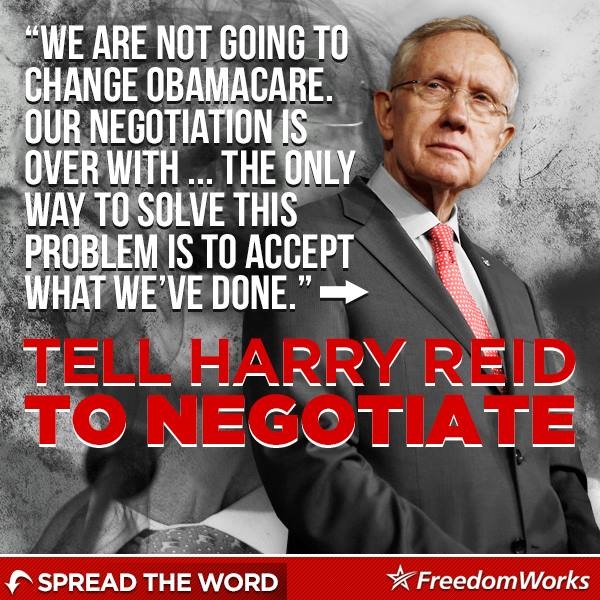 Reid's bombastic assaults on House and Senate Republicans is also important for him where it matters most: getting reelected. Harry Reid will have to defend his Senate seat in 2016, a year that could prove tricky for him depending upon who the Republicans nominate for President. Should the GOP end up picking a rising star like Ted Cruz, Mike Lee, Rand Paul or Marco Rubio, the Republican turnout in Nevada could be strong enough to scare Reid. By going to war now, Reid can help boost his campaign war chest and intimidate challengers from going after him.

Already, he’s begun seeking commitments from aides to stay with him through 2016. He’s spending more time fundraising everywhere from New York to Southern California. And he’s not afraid to issue a warning to a potential GOP opponent, Gov. Brian Sandoval of Nevada, who — if he’s reelected next year — will be in the middle of a second term in 2016.

A long line of Republican campaign groups will mount serious efforts to oust Reid, and he knows that by standing firm now and holding out for a win against the House and Senate GOP, he can lay the groundwork for a robust 2016 campaign cycle for him. He'll be able to marshal support from liberal groups everywhere when he reminds them that he stood for their tax, spend and control philosophy.

But we can't let the public forget: this is Harry Reid's shutdown. He owns it. When you read the bizarre stories of the World War II Memorial closure, restricting access to the ocean, suspending the Amber Alert system and more, don't let the media fool you.

This is Harry Reid's Shutdown.