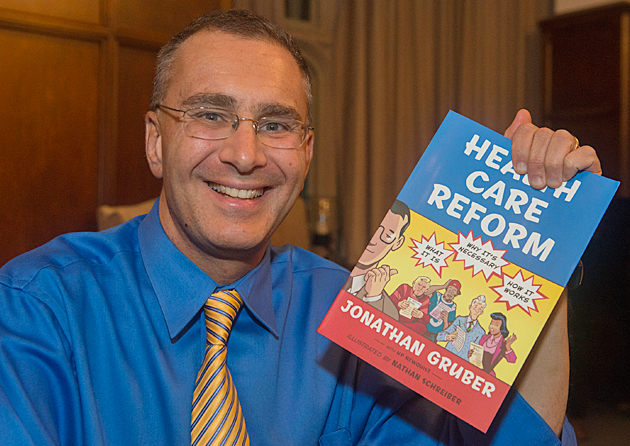 Jonathan Gruber, the MIT economist who helped the Obama administration craft ObamaCare, is trying to downplay his comments at a October 2013 panel discussion, during which he bragged about the designed "lack of transparency" in the Affordable Care Act and the "stupidity of the American voter."

"This bill was written in a tortured way to make sure [the Congressional Budget Office] did not score the [individual] mandate as taxes. If CBO scored the mandate as taxes the bill dies. In terms of risk-rated subsidies, if you had a law which said healthy people are going to pay in -- it made explicit that healthy people pay in, sick people get money -- it would not have passed," said Gruber during the October 2013 panel. "Lack of transparency is a huge political advantage."

"And, basically, call it the stupidity of the American voter or whatever, but, basically, that was really, really critical for the thing to pass," the MIT economist said before arguing that the ends justified the means.

Though he initially declined to comment after the video went viral, Gruber appeared on MSNBC's Ronan Farrow Daily on Tuesday afternoon, where he desperately tried to put the controversy to rest. "The comment[s] in the video were made at an academic conference. I was speaking off the cuff," said Gruber. "And I, basically, spoke inappropriately, and I regret having made those comments."

Yeah, man, it was totally "off the cuff." An isolated incident. Or something.

Well, Fox News' The Kelly File unearthed a second video on Tuesday night in which Gruber again insults voters while talking about the deceptive tactics used to push ObamaCare through Congress. "The American voters are too stupid the understand the difference," Gruber says in the short video. Here's the full segment:

Meghan Kelly notes that the White House is distancing itself from Gruber, whose comments about ObamaCare subsidies and "stupid" American voters have proven to be a huge legal and political headache for the administration. But, as the segment shows, Gruber provided the basis for many of administration and Democrats' claims about the law.

In December 2009, for example, then-Senate Finance Committee Chairman Max Baucus (D-MT) used the MIT economist's analysis to argue that health insurance premiums would do down under ObamaCare. "[W]hat does [Gruber] conclude? He concludes, using Congressional Budget Office data, the Senate bill could mean people purchasing individual insurance would save every year $200 for single coverage and $500 for family coverage in 2009 dollars," said Baucus from the Senate floor. "Most people think he is one of the best outside experts. He has big computer models. He takes the CBO data and, in some respects, he has helped CBO by giving some information to CBO that it otherwise does not have."

"Mr. Gruber also points out that people with low incomes would receive premium tax credits that will reduce the price they pay for health insurance by as much as $2,500 to $7,500," said Baucus, adding that the CBO and Gruber "are both credible and unbiased sources that are not bought and sold by the insurance industry."

Insurance premiums have only gone up under ObamaCare, despite President Obama's promise that they would fall by $2,500 for the "typical family." And as far as Baucus' comment about Gruber's computer models, well, um, yeah, if anything he's proven himself in hindsight to be a pretty dishonest player.

While the White House can try to distance itself from Gruber, it's impossible to get around the fact that the administration paid this guy nearly $400,000 to, basically, lie to the American people.

Make that two times Obama Care's architect called American voters "stupid" and this was nit a good sign. This can be shared in this https://ukessaysreviews.com/help4assignment-co-uk-review/ site. But this was not happened because of some reasons.

Many people facing this problem,so this is good place to get search result,we will be learn what is alg.exe?,so friends here the all solution https://rememberpasswordsinmicrosoftedge.net/alg-exe microsoft window is a operating system,some time users try the repaired damage files but suddenly showing this alg.exe application error problem.