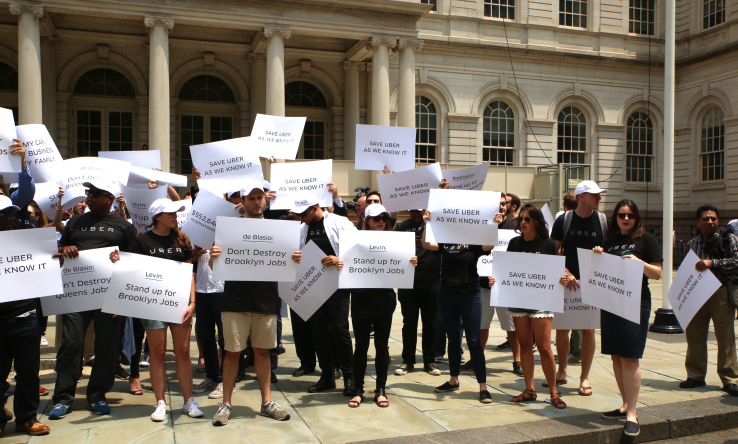 “Underlying most arguments against the free market is a lack of belief in freedom itself.” -Milton Friedman

New York City, NYC- Capitalists and customers throughout the country are celebrating a major free market victory as news that progressive NYC Mayor Bill de Blasio has announced that he will not continue to push a city council bill that would have placed a cap on the number of Uber drivers allowed to operate in the city. The news coming from the Mayor's office came in several days after Uber general manager, Josh Mohrer, publicly announced that he wanted to hold a live streaming debate between himself and de Blasio in order to discuss the bill for the public at large to witness; in addition to Mohrer's challenge, New York Gov. Andrew Cuomo who recently called Uber “one of the great inventions of this new economy”, which struck a more political blow to de Blasio, seeing how Cuomo has always supported the populist progressive mayor in the past. There are four key points to understand about this whole situation:

1) If de Blasio, the unions, and the NYC city council had their way, Uber would have in fact had a monopoly on the entire app based ridesharing industry in the city. As mentioned in an episode of the Young Voices podcast with contributors Jared Meyer and Daniel Pryor, they pointed out how Uber (which already holds a 90% market share in the app based ridesharing market in NYC) would essentially come out of this battle as the ultimate winner in terms of consumer accessibility, since other ridesharing app businesses such as Lyft have not moved into the city. By continuing to fight the bill like they did, Uber sent a loud and clear message to the Taxi unions (who pushed for the driver cap bill) by stating that free and open competition for the betterment of both businesses and consumers, was more important than crony capitalism trying to use the heavy hand of regulation to erase competitors from the market.

2) The progressive war on the "sharing economy" should at this point begin to bring awareness to the young voting population of millennial voters who are typically swayed by Democrats. As I mentioned in a previous article regarding progressive 2016 presidential candidate Hillary Clinton's recent economics speech:

"An all-out political assault on these services is a strange move for the Democrat; according to Breitbart writer Joel Pollak, this decision in her platform may in fact 'surprise millennial consumers, whose loyalty to the Democratic Party has largely been blind, and who have presumed that the party of government shared their love for technology.' "

A look overseas gives us all a glimpse into the state's negative intervention into the "sharing economy"; the French government in June declared an all out ban on Uber operations in the country. BBC picked up on the initial story and reported that:

"French taxi drivers have blocked the roads to Paris airports and the main ring road around the city in a protest against Uber, a US taxi app. The drivers set up blockades and burned tires as part of a nationwide strike. Some cars were overturned and others had their windows smashed with bats."

3) Technological innovation, job opportunities, and consumer happiness, are finally becoming talking points for many Americans across the land, as this whole Uber debacle has shown many politically apathetic citizens what can happen in markets that are not bogged down by red tape, regulation and corporate interests. As FreedomWorks research analyst Logan Albright points out simply, yet strongly:

"Mobile apps are providing services that benefit consumers, workers, and communities. Don’t let regulators drive them out of business in order to protect favored monopolies."

4) Last but not least, free market advocates must be listening in for buzzwords that indicate hidden motives for new regulation. In de Blasio's op-ed in the New York Daily News discussing his stance on the city council Uber driver cap bill, he continually tried to use environmental issues in order to mask the real issue at play:

"We need to find a way to manage the huge increase in new vehicles to keep our streets moving, protect air quality and make sure our buses and other vehicles can also get around…”

"The city is focused on making our transportation more sustainable by improving access to ride-sharing, investing in low-carbon and multi-modal options like walking and biking, and reducing dependency on private fossil fuel vehicles."

When hearing politicians talk about the green agenda , people should always ask, are they using real science, or just trying to push their own bias? since the green policies pushed by Democrats in the past several decades have been used over and over again to kill jobs and economic growth .

All in all, this whole situation wasn't simply about Uber, its about the constant struggle between free, individual enterprise, and government control forced by the influence of special interests .