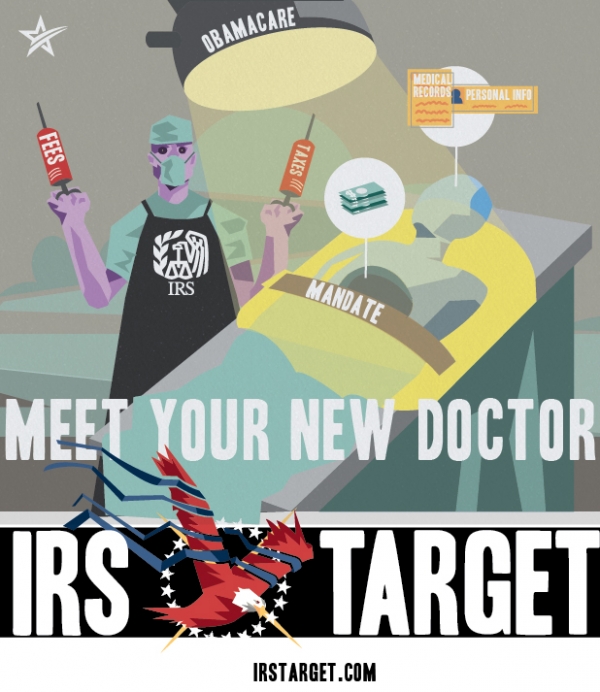 This week Americans have woken up to revelations of IRS targeting of conservative organizations, and a lawsuit alleging an illegal IRS seizure of 60 million private medical records. If you think these developments are scary, sit down for this: the Internal Revenue Service is also about to become the leading enforcement agency under ObamaCare.

That's right. The IRS will be the primary enforcement agency of the Patient Protection and Affordable Care Act (PPACA).
Though Obamacare is a sweeping, pan-government reform, the amount of power it delegates to the IRS is staggering. All told, the law delegates 47 distinct new powers to the national tax-collection agency. These powers can be grouped into three broad categories: tax/fee collection, credit/subsidy distribution, and information harvesting. The application of the new functions is as broad as the 2000-plus page bill is long. Here are just a few examples of what's in store.

IRS's main job under PPACA is to collect the tax penalties on individuals and employers that are the linchpin of the new health care system, which goes into full operation on January 1, 2014. These tax penalties are designed to compel all Americans to purchase, and all but the smallest workplaces to offer, government-controlled health insurance. Although for political reasons Congress went out of its way to avoid calling the individual and employer mandate penalties "taxes" -- and President Obama even went so far as to vehemently deny that they are taxes -- the penalties are in fact, you guessed it, taxes. They're situated in the Internal Revenue Code and will be collected by the IRS. The Supreme Court even ruled that they're only constitutional because … they're taxes.

Among the numerous other taxes and fees the IRS is tasked with collecting: a new, highly unpopular Medical Device Tax; a new 3.8 percent tax on income from real estate and retirement investments; and several new fees levied annually against health insurance providers and brand name pharmaceutical producers and importers.

One of IRS's more intrusive tasks will be enforcing a "maximum profits" cap on insurance companies, the so-called Medical Loss Ratio (MLR) rule. This regulation is billed as a "consumer protection" measure, "protecting" consumers from being "overcharged" for their health benefits; however, its real effect will be to reduce competition in insurance markets, which will result in less choice, lower quality, and higher costs for consumers.

As an economic matter, all of the law's various taxes and fees will be passed on to consumers, in the form of higher prices and lower quality. A recent report by the Committee on Energy and Commerce of the US House of Representatives reveals the extent of these new costs to consumers. The average premium price increase if you intend to keep your current healthcare is projected to be 73 percent, while premium rates for new health coverage are predicted to increase by a staggering 96 percent.

Markets will also be distorted by several new, IRS-administered subsidies. The law introduces a wide array of these, but the largest of them by far will be a set of tax credit premium and cost-sharing subsidies for people who purchase their health plan through one of the new government-run "exchanges," pseudo-marketplaces that will function as the system's bureaucratic hubs. These subsidies will cost tens of billions of dollars per year, at first, and eventually hundreds of billions.

Another subsidy is the Small Business Health Care Tax Credit, which offers a subsidy to small firms under 25 employees to help them afford to keep offering health coverage to their workers. This credit, which features an application form of mind-boggling complexity, implicitly acknowledges the health care law imposes major burdens on small businesses.

Yet another IRS-administered subsidy: the Qualified Therapeutic Discovery Project Program, which offers up to one billion dollars in tax subsidies for companies to produce experimental treatments for “previously unmet” medical needs. This is simply a form of corporate welfare via the tax code, risking taxpayer money to pick winners and losers in the marketplace.

Most of IRS's 47 new duties under the law require it to harvest incredible amounts of sensitive personal and financial information. For example, IRS is required to share information about the type and value of the insurance coverage we have received with the Department of Health and Human Services (HHS), in order to help determine eligibility for tax credits. But that's not all. As the Wall Street Journal reported earlier this week:

"To monitor compliance with these rules, the IRS and HHS are now building the largest personal information database the government has ever attempted. Known as the Federal Data Services Hub, the project is taking the IRS's own records (for income and employment status) and centralizing them with information from Social Security (identity), Homeland Security (citizenship), Justice (criminal history), HHS (enrollment in entitlement programs and certain medical claims data) and state governments (residency)." (Source: Your Next IRS Political Audit: The tax agency is getting vast new power in health care," Wall Street Journal, May 14, 2013.)

The privacy and political-abuse concerns raised here should be self-explanatory.

Given the mounting evidence that the the nation’s tax collection agency -- also one of its most feared law enforcement agencies -- has committed disturbing abuses of power, we should pause before letting the IRS take a leading role in enforcing something so critical, and so undeniably personal, as our healthcare.