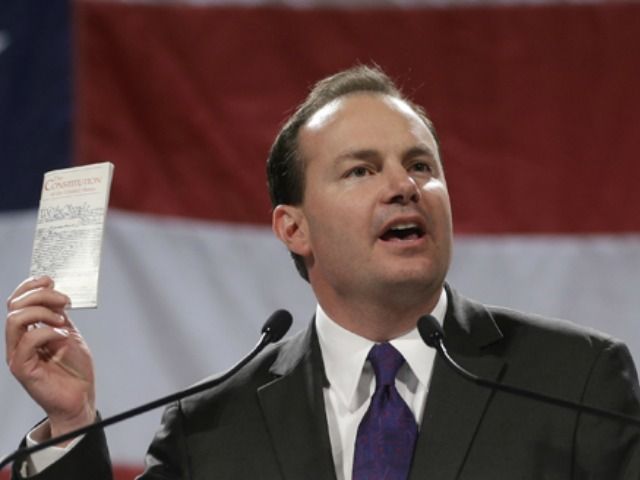 Mike Lee is standing against ObamaCare in a big way.

Sometimes a man’s just got to take a stand. Rand Paul did it his 13-hour filibuster on drone strikes, Ted Cruz did it in his 21-hour floor speech to defund ObamaCare, and now Mike Lee is invoking an obscure Senate procedure rule to completely repeal everyone’s least favorite health care law.

You read that right, Mike Lee is trying to repeal ObamaCare, root and branch, fulfilling the promise Senate Republicans made on the campaign trail, but have yet to live up to.

Here’s how it’s going to work. It’s complicated, so try to stay with me.

Senate Majority Leader Mitch McConnell, in a move reminiscent of Harry Reid, has filled up the amendment tree on the Senate’s version of the highway bill, only allowing two additional amendments. One of these is to reauthorize the Export-Import Bank. For allowing this after promising not to cut a deal with Democrats to bring the Bank back from the dead, Ted Cruz memorably called Reid a liar on the Senate floor. The other amendment, however, would repeal ObamaCare completely.

Frustrated at having to work with a Majority Leader who has violated his word and acted hypocritically, Mike Lee is invoking his superior understanding of Senate rules to get a simple majority vote on repealing ObamaCare.

Ordinarily, this amendment would require 60 votes to proceed because it is not germane to the main thrust of the highway bill. However, Mike Lee intends to challenge the presiding officer of the Senate’s ruling on the matter. To overrule the presiding officer takes only 51 votes, and after that final passage only takes 51 votes as well. This method allows Republicans to repeal ObamaCare without needing a single Democrat’s vote.

It's important to appreciate the brilliant strategy at work here. Since President Obama is sure to veto any bill that repeals his signature legislative achievement, the only way for establishment Republicans to expand wasteful spending and reauthorize the Ex-Im Bank's corporate welfare program will be to vote against repealing ObamaCare, which no one with any brains is going to want to do. If the ObamaCare repeal amendment does pass, and Obama vetoes it, Republicans will have proven that they are willing and able to repeal ObamaCare as son as they manage to regain the White House.

Mike Lee deserves our applause and support for taking a stand and making a real effort to repeal one of the most damaging laws in American history. It’s something Republicans should have done a long time ago. That’s why we’re issuing a special, double-weighted key vote, in favor of repealing ObamaCare in the Senate. Tell your Senators to stand with Mike, fulfill their campaign promises, and vote to repeal ObamaCare in its entirety.

Stone stone, what are you referring too with respect to tax dollars wasted on repeal? What do you think is the "job" of a Republican congressman? Let me help you out. There are virtually ZERO dollars "wasted" on repeal efforts AND the "job" of a republican congressman is to advance the party platform which damn well better include the repeal of statist, collectivist efforts like the ACA.

The GOP has done nothing but obstruct for the last 7 years. So yes- they have wasted untold billions of dollars- not to forget when they shut down the government last year. But no matter- they can cry and whine all they want. They aren't going to be able to repeal the law. Might as well do something useful...

Exactly how many more of my tax dollars are Republicans going to waste to to repeal a law they have so far lost dozens and dozens of times in efforts to repeal? They lost. Its time for them to stop acting like babies and do their jobs.