We all think we're good communicators, don't we? The truth is, we probably are when we're among our "crowd" -- the folks we know and with whom we are most comfortable. We know the slang, can read all the nuances both verbal and non-verbal, can easily sort the empty platitudes from the substantial thought, and know who is worth listening to and who is not worth the time. We call all those social cues and rules "culture" and people make a lot of money talking about cultures and, more importantly, teaching people how to understand different cultures in order to fit in to them, like an anthropologist who wants to move among the lions without becoming lion chow.

We who consider ourselves conservative grassroots folk have our own culture as well. We have phrases we easily understand when we use them with each other: creative destruction, trickle-down, Tenth Amendment, and so on. Over years, sometimes decades, we've packed meaning into each phrase so we can use them as "shortcode" to replace entire paragraphs of explanation. We don't have to re-explain why taking over a huge failed business and breaking it up is ultimately good for a free-market economy because we have a phrase that carries all that meaning for us: creative destruction.

But consider for a second how our "shortcodes" might appear to those who aren't hip to our lingo. If you had never seen the phrase "creative destruction" before, what word might stand out to you? Did you say "destruction"? Good. So did I. And if you saw a speech by a candidate or an activist that involved that phrase in relation to a business at which a couple of your relatives worked, would that word hold a whole heap of bad? If you say anything other than "heck yes!" you need to try again. Mitt Romney ran face first into that very problem during the last Presidential election when he and scores of conservatives cheered creative destruction without taking into account how people who didn't know Joseph Schumpeter from Joe Shlabotnik would understand the phrase. They didn't consider how someone from outside the culture of more or less free market capitalism (which, by the way, is where most of America lives) would react. Of course, much of the electorate focused on "destruction" and didn't listen to the conservatives who, instead of breaking down the concept into easily-explained bits and translating them into the language spoken by the average voter, simply told people creative destruction was great and everyone should read a four-foot high stack of economic texts to understand why. 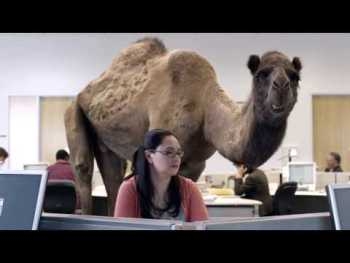 Chris Brogan, whose newsletter I consider a must-get, set me to thinking more about language last week. Let me share a bit with you of what he wrote.

In the “duh” department, I want to offer a point: language choices are very powerful. My favorite ways to use language is to show a connection to the culture I’m addressing. For instance, when I write a British person (Hi, Peter!) and say “I’m chuffed” about something, I know that he or she might on some level be chuffed right back that I know the expression and chose it as a sign of connection.

Now before you say, "Yep, Jimmie. That is a "duh" thing to say. What am I, stupid?", let me ask you to compare the last political ad you saw to the last commercial ad you saw. Which one communicated more effectively to you? Which one did you most easily remember? Which one spoke your language best, without sounding stilted or contrived? Which one came to your mind the fastest just now? Of course the commercial ad stuck with you. It was designed to do just that by people whose livelihoods depend on their ability to reach from one culture (corporate ad executives) into many others effectively and consistently. The commercial world (which, I'll note here, bases employment on actual results) has figured out how to communicate across cultures and how to speak many different languages to sell a product, belief, or idea and make it memorable. Grassroots activists need to learn as well. The sooner we do, the sooner we'll get the results we want.

One last note. The Founding Fathers wrote that the equality of men and our inherent rights were "self evident" facts. They weren't. America had to fight an 8-year war against the greatest military force in the world. For another four years, debates raged across the colonies. What we know today as The Federalist Papers appeared as front-page newspaper editorials. People debated, sometimes harshly, in town halls, churches, living rooms, public squares, and pubs. More than 11 years passed between the day the Founders signed their name to that 'self evident" statement of rights to the day we ensconced them into law in our Constitution. There is no such thing as a "self evident" truth in politics; they all require explanation. (tweetable) Andrew Breitbart often said culture is upstream from politics. He wasn't talking simply about entertainment but about language as well. We have to convince others of what we believe and why, and we must do it in language clear to them, no matter the cultures in which they live. Get outside your own culture. Learn another way. Spread the word. Explain well. That's how we'll win.

2
10/08/2014
"Orwellian Oregon Wants To Define What A Journalist Is"
"https:\/\/www.freedomworks.org\/content\/orwellian-oregon-wants-define-what-journalist?social=facebook_share"
"Once again, we're debating who is a real journalist, and who is not. The result of this determination could have much greater impact than anyone realizes."
https://fw-d7-freedomworks-org.s3.amazonaws.com/styles/thumbnail/s3/field/image/type%20writer%20keys.jpg?itok=rlMOejOF
Blog