Napolitano's "Suicide Pact" is an Important Book Everyone Should Read 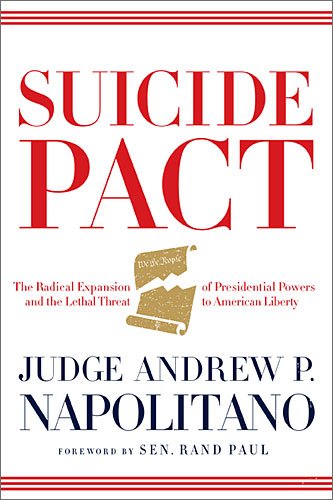 It’s easy to imagine, in this era of the 24-hour news cycle, that things are the worst they have ever been. One could easily conclude that our liberties are a hair’s breadth away from being altogether eliminated at the hands of a government on the brink of totalitarianism, and the hope of restoring the American vision to its halcyon days of milk and honey grows bleaker by the hour. The president has no regard for the rule of law, and his supporters will stop at nothing to persecute and marginalize anyone who disagrees with the goals and governing philosophies of Dear Leader.

These concerns are not without justification, but as is always the case with matters of historical import, a little perspective is in order.

In his grimly titled new book, Suicide Pact: the Radical Expansion of Presidential Powers and the Lethal Threat to American Liberty, Judge Andrew Napolitano offers a detailed history of the abuse of executive power in the United States with a depth and thoroughness uncommon in the usual torrent of political books. With an unquestionably learned background and an exhaustive amount of research, we find here an actual history book, filled with scores of illuminating facts the average person - and even the dedicated political insider - may not know.

We live in an age where the Obama administration doesn’t hesitate in the use of drone strikes, warrantless data collection, targeting of political enemies, and a slew of executive orders bypassing Congress. It remains of vital importance to keep these issues alive and remind ourselves of the dangers of government in general, and of executive power in particular.

But the general point of the book is to illustrate how the abuse of executive power is not unique to Barack Obama or George W. Bush, although a large percentage of the pages are indeed devoted to those administrations. In fact, rare was the president who didn’t find some way to circumvent the Constitution in service of his own ends. All of this stems from a fundamental belief shared by politicians of both parties that our basic rights come from the grace of government, not as an intrinsic part of human nature, as Napolitano contends. This realization can lead us down two alternate mental paths, depending on our temperament, and provide either hope, or dismay for the future.

For the pessimistic among us, we can observe that the struggle against tyranny goes all the way back to our nation’s founding, with even our earliest president’s abusing the power they had been granted just decades after fighting a war to escape that sort of thing under British rule. It can be discouraging to realize that defenders of liberty have been locked in perpetual combat for nearly two and a half centuries, and are still facing the same obstacles as they did in the Colonial era. “What has been the point of it all?” one might ask. “Has nothing changed?”

If nothing else, it is comforting to know that we are in good company with our predecessors in the fight for liberty, and that the path before us has been tread by others. Barack Obamas will come and go, but the need to defend the Natural Law, the Law which supersedes anything written by Congress, and from which all of our fundamental rights derive, carries on.

The Judge concludes his book with the acknowledgement that the fight for liberty may well be a losing one, but it is one well worth fighting. The stories in this book reveal the need for constant vigilance in defending our freedoms against those who would take them from us. It’s a sobering, but nevertheless inspiring read that deserves a place on any freedom fighter’s bookshelf.