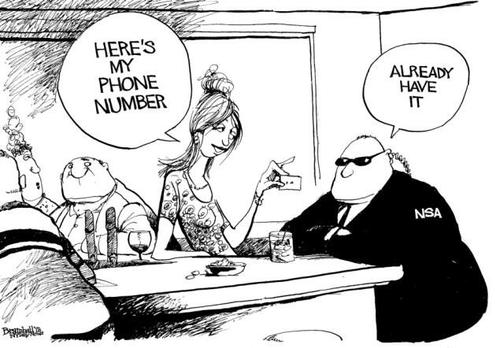 This morning we learned that the National Security Administration (NSA) has been collecting the phone records of every domestic Verizon customer since at least late April of this year. Under the auspices of "national security" the Obama Administration has been monitoring "meta-data" from Verizon customers. This includes who you're calling, where you're calling from and how long those calls last.

The legal authority the government is using to obtain these records stems from the Patriot Act, the now infamous post-9/11 legislation that gave Washington sweeping new powers as a means of combating terrorism. Civil liberty groups have argued for more than a decade that the authority granted by this law has massive potential for abuse. This morning those fears were proven true.

Author of the Patriot Act, Congressman Jim Sensenbrenner of Wisconsin said today that he was "extremely troubled" by the news and said that a dragnet of phone records like this program by the NSA should not be legal. Sensenbrenner told The Hill, "Seizing phone records of millions of innocent people is excessive and un-American.”

On Coffee & Markets this morning we talked to Andrew Grossman a legal scholar at the Heritage Foundation. Grossman said such data collection has, until now, only been used in national security investigations regarding foreign powers, counter-terrorism or espionage. He noted that the way this legal authority has been structured before, it is supposed to offer some protection because it must be tied to a specific case and potential threat.

To perform these actions, the government must go before a judge and get a warrant that they then submit to the relevant parties. In this case, the FBI and NSA went before a Foreign Service Intelligence (FISA) court and argued that it was necessary to allow this dragnet of personal data from Verizon. FISA courts enjoy a special status. They are not public, in fact their deliberations are top secret, and there is no argument from the other side, no second opinion the court must consider. A government official goes before the court and makes an argument for why they need permission for a particular action.

According to a report from the Department of Justice to members of Congress, the government went before the FISA court 1,789 times last year with requests for electronic eavesdropping on American citizens. Not once was a request rejected. The court rubber-stamped each and every petition from the Obama administration.

Responding to these reports, and the subsequent uproar from its citizens, the White House brushed off concerns saying that this program has been a "critical tool in protecting the nation from terrorist threats," and "allows counter-terrorism personnel to discover whether known or suspected terrorists have been in contact with other persons who may be engaged in terrorist activities, particularly people located inside the United States."

If you think the government is going to stop at your phone, think again. With more and more of your daily activities attached to the internet, it has become easier for America's intelligence agencies to monitor each and every aspect of your life. CIA Director David Petraeus recently noted just how effortless spying on the American public has become with the advent of "smart home" technology. “‘Transformational’ is an overused word, but I do believe it properly applies to these technologies, particularly to their effect on clandestine tradecraft.” It's more than a little alarming to hear the head of our most pre-eminent spy agency filled with glee when talking about the future of his industry.

Although I think each and every one of us wants to live in a safe country where you don't live in fear of a terrorist attack each time you get on a plane, attend a large public event or just enjoy a cup of coffee at your neighborhood cafe, there is a line, a point at which our government has too much power, too much authority in the name of "national security." I'm sure that if we lived in a country where all our phone calls, emails and daily movements were tracked, logged and examined by federal officials ensconced in their secure undisclosed location, we may never face another terror threat form outside our borders or within, but I don't want to live in that America, and I don't suspect you do either.

You're traveling through another demension, there's a sign post up ahead, your next stop: The Fourth Reich (western annex). All that's needed is a 'Reichstag' fire to seal the deal. However it could never really come to that. After all, the man that established the framework to make it all possible is........."extremely troubled"........by the news