Twenty states have plans to introduce hemp legalization legislation in 2013, and Tennessee just announced that it will be introducing a bill in 2014. Currently, there are nine states where farming industrial hemp has been made legal, pursuant to meeting state regulations, and only two states are allowing farmers to grow it.  Right now, Colorado and Vermont have bypassed federal laws that lump industrial hemp in with marijuana, and are actively opening up industrial hemp as an agricultural and business attractor to their states.

The arguments against legalizing hemp have centered around the relationship to the plant grown specifically for use in fiber and food, and marijuana. There are also concerns regarding possible difficulties by law enforcement in the ability to distinguish between the two plants. Alternatively, there is also an argument that there isn't a market for hemp, and so altering legislation is a wasted effort aimed at appeasing a very small sector of the population.

In consideration of the relationship between hemp and marijuana, many states have specifically defined hemp as containing a delta-9-tetrahydrocannabinol concentration that does not exceed 0.3%. For reference, marijuana typically has a THC concentration of between 5 and 10%, depending on the strain.  The plants are similar in appearance, from a distance, and the untrained eye may have difficulty telling them apart. It would stand to reason, however, that a farmer growing hemp legally would plant a straight-line crop, with no reason to hide what he is growing. It is also possible that a farmer growing hemp in a state where marijuana is still an illegal substance, may try to hide marijuana within his hemp crop.  This is addressed in ALL of the existing legislation, by requiring state permits to grow hemp, and subjecting farmers to routine inspection. There are also safeguards in place in much of the passed legislation to protect hemp farmers from wrongful prosecution.

As with any good, product or service, creating a market for it is the concern of those wanting to provide it and should not be the concern of the government. Currently, the US imports a substantial amount of the hemp produced in Canada and China. According to the Agricultural Market Resource Center: "The combined retail value of hemp food and body care products sold in the United States in 2010 was $40.5 million, up more than 10 percent from 2009, according to the market research firm SPINS." Kentucky's Ag Commissioner is already reporting a higher than expected response from businesses looking to locate in Kentucky to process industrial hemp. 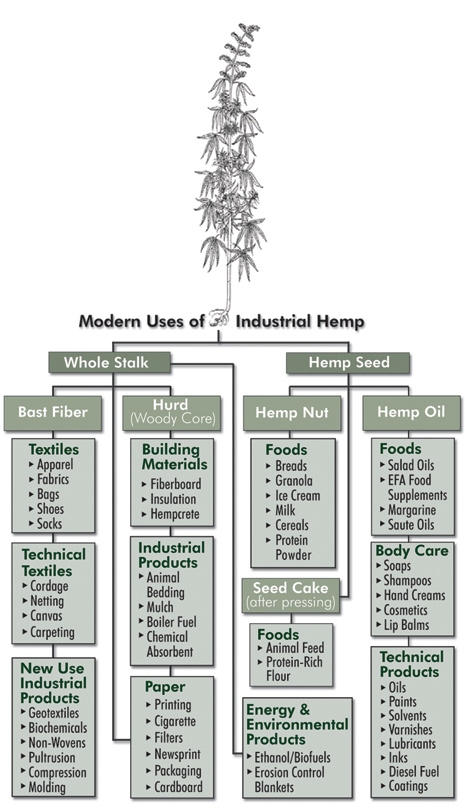 In the end, the debate around legalizing hemp should center around questioning why it was made illegal to begin with, and if the government really has any role in regulating a crop that is legal the rest of the world over, and is legal to import and already legal to use to produce goods for sale in the US. There are efforts to exclude industrial hemp from marijuana regulations at the federal level, and they are worth watching.  In the meantime, if states continue to pass aggressive legislation legalizing industrial hemp as Vermont and Colorado have, federal regulators may have a front too big to fight on industrial hemp.