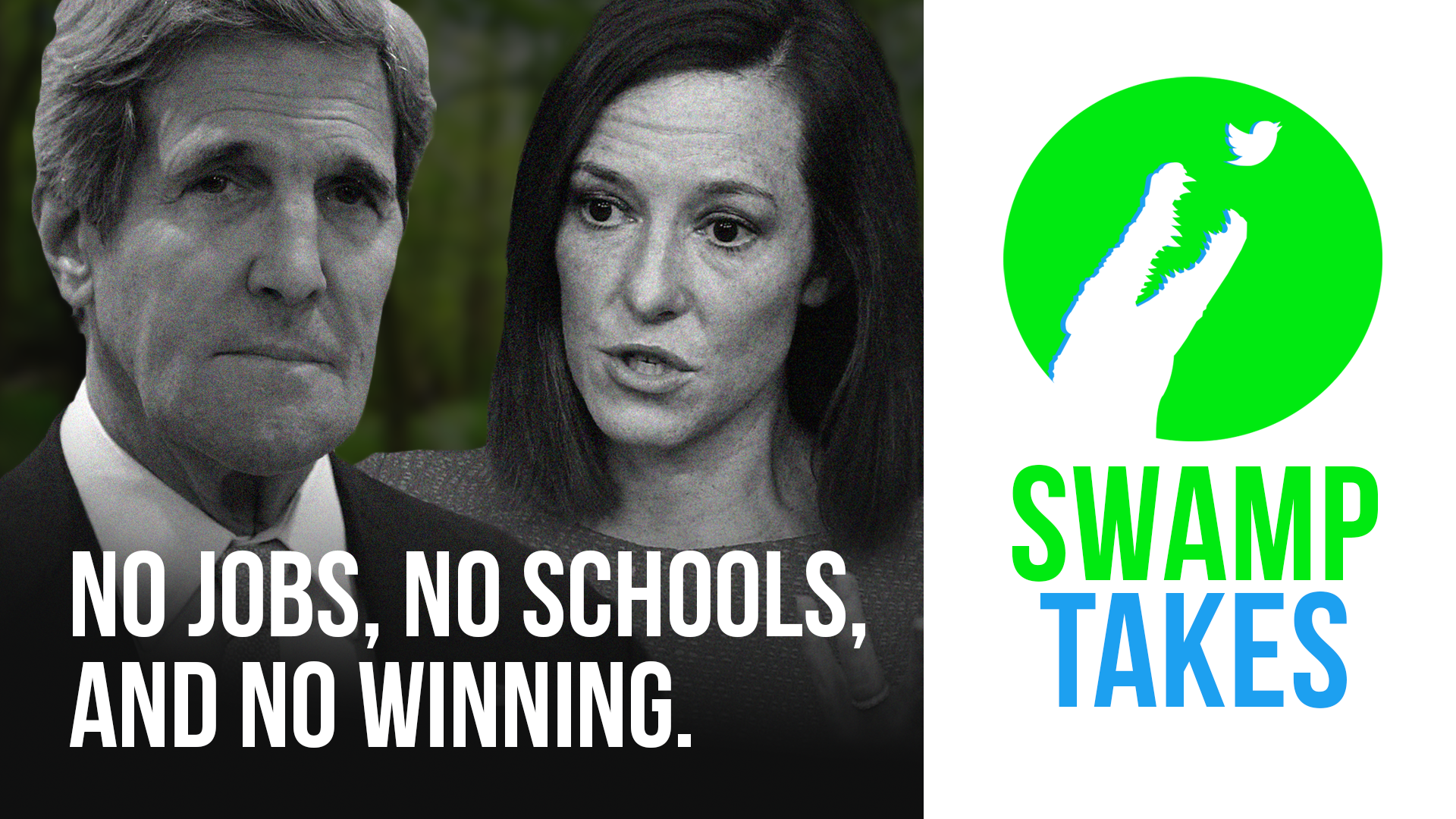 It’s no secret that the “Big Guy” … or “Sleepy Guy” … in the White House is a lifelong Swamp Creature who will lie, cheat, and plagiarize his way to the top. To prove just how out-of-touch the #Biden administration is with Real America, let’s look at a few of the most offensive (and downright cruel) takes that they have copped to so far this week.

John Kerry is asked what his message would be to oil and gas workers who "see an end to their livelihoods":

"What President Biden wants to do is make sure that those folks have better choices... That they can be the people to go to work to make the solar panels." pic.twitter.com/i9TYXlD9Jg

After unilaterally taking jobs away from thousands of American pipeline workers, “climate” czar John Kerry then had the audacity to tell these hard-working folks to go make solar panels. Gee, thanks Mr. Kerry, but there are no “green jobs” (not that the displaced workers want them). It’s nothing short of heartless for a rich swampy political elitist with a yacht and traveling by private jets to tell folks, who’ve endured countless hours of certification and trainings, that they can’t practice their profession and make an honest living. This is an especially cruel assault considering that the Democrats have already thoroughly suffocated America’s economy.

When pressed on their recklessness, their responses confirm that they don’t even care. For example, one fired Keystone worker now cannot afford to send his daughter to college. There’s no doubt that this is just one of the many horror stories of Biden’s job-killing agenda.

What Biden supporter out there will step up and support this family now thanks to their vote? Don’t worry, I’ll wait.

However, while I wait for the impossible, any American can see the utter hypocrisy of a Swampy Washington Elitist who travels by private jet uprooting the lives of blue-collar workers. Like the great #SassyWithMassie from Kentucky Rep. Thomas Massie said, we are proud to be “political science deniers.”

.@PressSec: Having 50% of schools open one day a week is part of a "bold and ambitious agenda." pic.twitter.com/fYLHJKHaeu

Americans have known since nearly the beginning of the government takeover that children do not suffer from Corona nor are spreaders of the virus. Since the Summer, the CDC and even Dr. Fauci has admitted that the safest place on Planet Earth for children is in the classroom.

Now, nearly a year later, Americans are still fighting the Lockdown Leftists to get kids back in school and back to living normal lives. Unfortunately, Biden’s “bold” strategy is to “open” 50% of schools for one day a week. Holding innocent children as political hostages has caused even Democrats to ask why #BidenLied and is actively denying #science. Of course, the answer is because he is letting socialist teacher unions call the unhinged shots.

3) Duke, Kentucky, and North Carolina all suck at BASKETBALL?!

Duke, Kentucky And North Carolina Are All Unranked In The ⁦AP⁩ Poll For The 1st Time Since 1961 ⁦@DailyCaller⁩ https://t.co/60FN1y2buo

ICYMI the Swamp isn’t the only place where people are living in the “Upside Down.” Three of America’s top college basketball institutions are all absent the AP Top 25 poll for the first time since 1961. This begs the question: is the COVID insanity having an affect on these squads?

Coach K of Duke University has made it known that he doesn’t even want to coach this season because of a disease with a 99% recovery rate.

Come’on man! Just look at these legendary coaches on the sidelines! It’s clear that (despite their pro-mask comments) EVERYONE is struggling to keep up with the absurdity of forcing healthy, innocent Americans to wear “face-diapers.”

Thanks for reading! Watch out for #SwampTakes and be sure to call them on their out-of-touch delusions! #ampFW

As states begin to reopen across America, starting with Georgia and Texas, there are many rumors out there that it is unsafe to do so. Quite to the contrary. Equip yourself to push back with some myth vs. fact: