Very soon, only 1 in 3 physicians will be independent. The rest will work for hospitals, insurance companies, and increasingly, Accountable Care Organizations. The trend is a result of perverse incentives in the medical market that make it difficult or impossible for doctors to operate outside of a corporate practice.

Rather than alleviating this trend, so that doctors can focus on treating their patients, Obamacare exacerbates the problem. 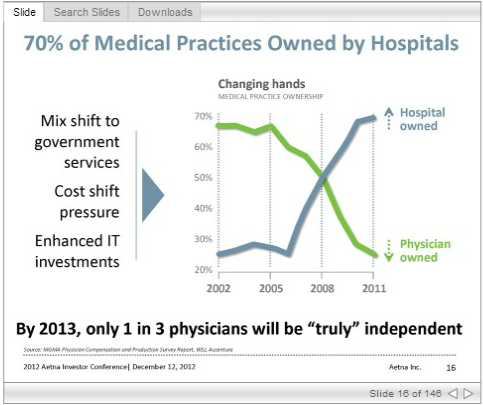 Due to taxes inside the new health care law, as well as reduced payments to providers, it will be increasingly difficult for doctors to survive financially under Obamacare. The need to follow the byzantine government and insurance company maze leaves many doctors struggling to find time for patients.

The trend is a permanent feature of the new medical economy. As with the shift away from doctors making house calls, doctors will be increasingly isolated from patients. This is yet another example of the failure of Obamacare, which claimed it wanted more access and involvement between patients and primary care doctors.

Back in July, 2011, The Medical Liability Monitor site said:

Doctors are becoming more like regular wage earners, albeit high paid ones. There are some strong drivers of this trend including the need to support health information technology, comply with regulations and deal with health plans. There’s also a desire on the part of a younger, increasingly female physician workforce to have a better balance between work and home life. If anything the forces pulling physicians into hospital employment will strengthen in the near term with the arrival of Accountable Care Organizations and other forms of deep integration.

Accountable Care Organizations are Obamacare's version of HMOs. Under the ACO model, groups of physicians and other providers work for the ACO, and insurance companies (or the government) pay the ACO. The ACO has a financial interest in keeping patients well, as well as in minimizing its own costs.

The trouble with ACOs is the same as with HMOs and indeed all third-party payer systems. The ACO model relies on regulation and the awareness of the third-party insurer to make sure patients are cared for (so they can keep paying their premiums), and are not simply ignored to save money.  Since the patient is not really in charge of choosing between competing ACOs, there is no one pressuring the provider to perform.

Some doctors are choosing to step off of the insurance company treadmill, advertising their services and fees directly to customers on a cash basis. Older doctors or any practicioner that doesn't want to work longer hours for less money will likey, in a completely rational move, choose to retire, or to step away from daily practice and into management.

With a shortage of primary care physicians already facing us, the trend from independent practitioner and entrepreneur to employee may not inspire many to choose to go to medical school in the first place.

The trouble with fanciful solutions like Obamacare is that when they fail, they do great harm to society. We don't know exactly what forms that harm will take just yet, but we do know that failure is inevitable, because reality gets a vote.