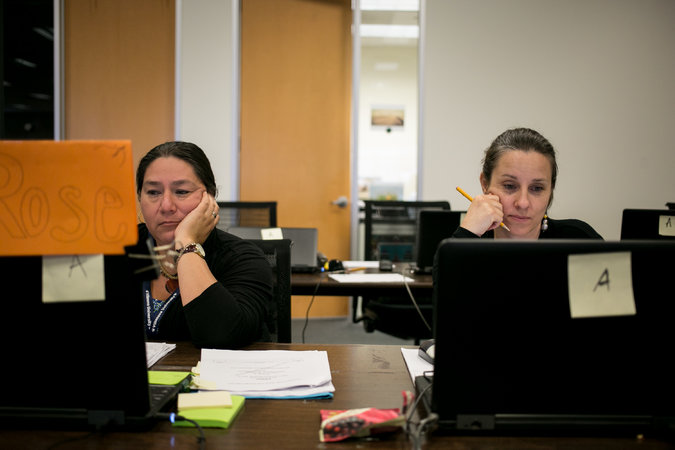 "...the scoring process can evoke the way a restaurant chain monitors the work of its employees and the quality of its products. From the standpoint of comparing us to a Starbucks or McDonald’s, where you go into those places you know exactly what you’re going to get,” said Bob Sanders, vice president of content and scoring management at Pearson North America, when asked whether such an analogy was apt. McDonald’s has a process in place to make sure they put two patties on that Big Mac,” he continued. “We do that exact same thing. We have processes to oversee our processes, and to make sure they are being followed.”

Pearson has implemented within their current training some measures to ensure consistent and quality grading:

prospective scorers study examples of student essays that have been graded by teachers and professors as well as the scoring criteria. To monitor workers as they score, Pearson regularly slips previously scored responses into the computer queues of scorers to see if their numbers match those already given by senior supervisors. Scorers who repeatedly fail to match these so-called validity papers are let go.

This assembly line model Pearson is trying to evoke in grading these exams has bothered a large number of teachers and other professional educators, like special education instructor Lindsey Siemens in Chicago. Lindsey has gained attention for her concern over tests not primarily scored by professional educators directly; “Even as teachers, we’re still learning what the Common Core state standards are asking,” according to Ms. Siemens, “so to take somebody who is not in the field and ask them to assess student progress or success seems a little iffy". While the argument has been made that taking the time to score these massive exams would take away time from teacher's primary duty (teaching), educators have found a fault in the logic behind the exams themselves.

The root of this whole issue is best summed up by Austrian economist F.A Hayek, "We need decentralization because only thus can we insure that the knowledge of the particular circumstances of time and place will be promptly used". If we wish to end this issue threatening the education of our children and the jobs and roles of professional teachers, states must end the corporate monopoly on education which is being implemented throughout the nation by use of Common Core.