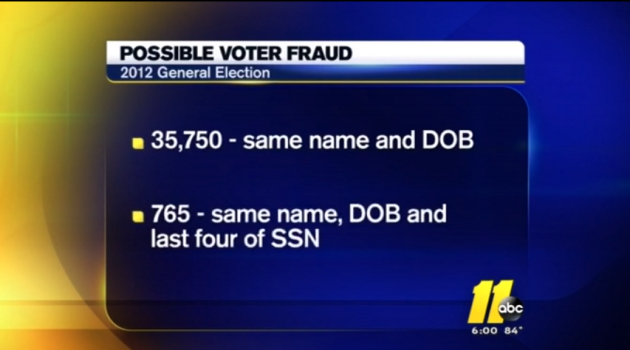 The North Carolina Board of Elections found just over 35,000 possible cases of voter fraud in the state. If verified, the findings will provide proof of significant voter fraud and demonstrate the need for voter ID laws to protect the integrity of our elections.

ABC News WTVD-TV in Raleigh-Durham, NC reported on the results of the study:

Initial from the Board presented to the Joint Legislative Elections Oversight Committee Wednesday showed:

765 voters with an exact match of first and last name, date of birth, and last four digits of the social security number were registered in N.C. and another state, and voted in N.C. and the other state in the 2012 general election.

35,750 voters with the same first and last name and date of birth were registered in N.C. and another state, and voted in both states in the 2012 general election.

In addition, the Board of Elections “discovered 81 deceased voters that had voter activity after they died.”

The findings were a result of North Carolina’s participation in the 2014 Interstate Crosscheck study that reviewed voter records in 28 states (22 states did not participate in the study).

Left-wing groups and elected officials, including the NAACP and Vice President Joe Biden, have aggressively criticized voter ID laws by making the wild and emotionally filled argument that these measures were designed to disenfranchise black voters.

Finding significant voter fraud would provide the proof to justify voter ID laws in North Carolina and other states and end the race card politics that is clouding this important issue.