This past Sunday in the New York Times, Paul Krugman opined about a better time in America when the Twinkie was still revered, when families huddled around their black and white television to watch "The Howdy Doody Show" and the wealthiest among us paid their "fair share" by means of a 91% marginal tax rate. Aw, yes the good ol' days....

He remarks that despite historically high tax rates during the 1950s, business owners and those in the highest tax brackets didn't "Go Galt" and deprive the nation of their talents as Ayn Rand's novel "Atlas Shrugged" envisioned they would. He notes however that they did deprive some of potential jobs. How? Well he makes mention of the fact that their incomes were negatively affected, and their lifestyle's curbed as compared to the "Roaring 20s", by the squeeze of high taxes. Therefore, they lived more modest lifestyles and hired less help.

But nonetheless, Krugman believes that America would be a better, more "moral" nation if we were to return to these staggering tax rates and the wealthiest paid their fair share. Yes, Mr. Krugman, because how incredibly immoral it is to allow people to keep more of what they earn.  Especially if those earnings allow people to purchase boats skippered by someone else, or large homes built by construction workers and staffed by maids and gardeners.  Gasp! I mean, we wouldn't want that would we?  We wouldn't want wealth distribution by means of job creation...

Excuse my sarcastic tone, but it's hard for me to believe that someone as highly educated as Krugman would fail to to cite the real issue that we're dealing with today in regards to our tax system.  It's not that the wealthy don't pay enough. In fact the top 10% of income earners currently pay over 45% of the federal tax burden. The problem isn't even that our tax rates are too low. No, the real problem is that we don't have enough people paying into the system, period. 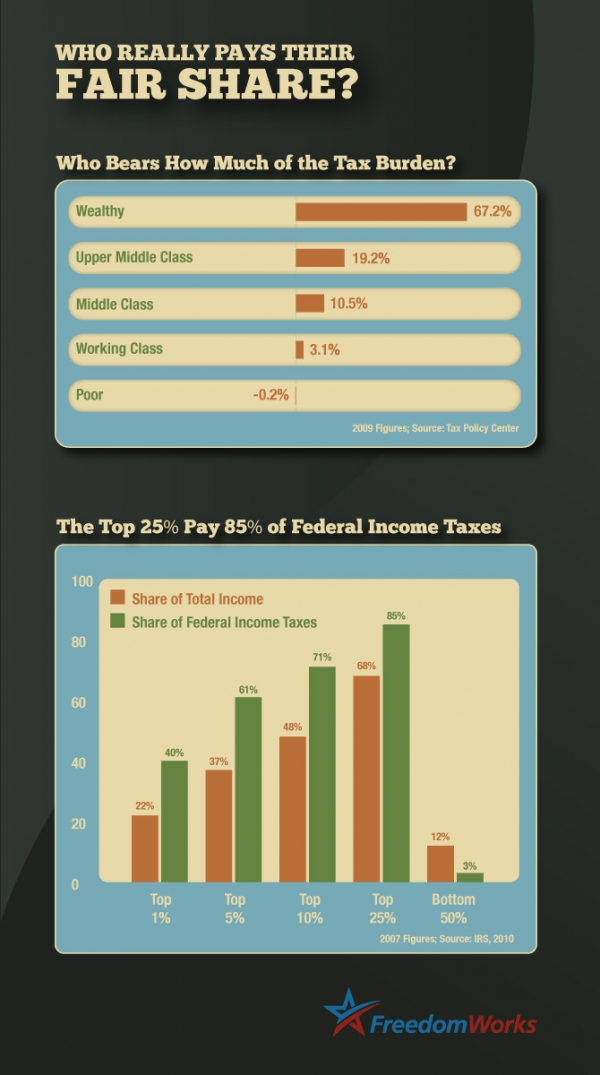 In 1955, the percentage of Americans who owed zero federal tax liability was 25%. Contrast that with today's startling fact that over 47% of Americans pay no federal income taxes, and one might begin to believe that therein lies some of problem.

It is the default position of Keynesian economists to assume that we can extract just a little more from the wealthy and that will make our revenue problems go away. What they fail to take notice of is the fact that regardless of what the top tax rate is, as a nation we have never taken in more than 21% of our GDP in tax revenue.

In fact, during the 1950s when tax rates hit 91%, as a nation we took in a smaller percentage of GDP than we are taking in today. The unfortunate reality is that today we have fewer producers paying more of the burden. We can raise revenue without raising rates by expanding the number of people in the workforce and paying taxes. Lowering tax rates would allow for employers to hire more people who would then in turn begin to pay into the system. Put simply; we need to lower the tax rates, simplify the tax code and expand the tax base.

In the current tax system, only big corporations can afford the big government lobbyists that ensure their tax breaks, gimmees and loopholes.  Average Americans and small businesses are not so fortunate.  If you want to grow the middle class and the economy, end this crony rewarding insider system.  If what you really want to create is more "fairness", simplify the code.

One final note - Krugman harkens back to this era while noting that those of us who challenge his economic assumptions would want to return to the days where minorities, women and gays "know their place."  I wouldn't mind a bit spending my days apron clad and in the kitchen, but in the Obama economy that just isn't an option anymore.

Let me just add that I couldn't care less about your color, race or sexual preference.  If this is really an issue of discrimination, let's not discriminate against potential job creators and wage earners, regardless of their make. I want Americans to have equal opportunity and equal responsibility.  I want you to pursue happiness, and if that involves getting rich, by all means do it. Hopefully you'll create jobs, especially if those jobs go to skippers, construction workers, maids and gardeners.  Because that would really chap Krugman's hide.

How it is Paul Krugman can be called upon for comments onb economic issues, and carry the so called honors he has - proves mostof these types are either ignorant or have a false agenda. This guy's comments are worthless.

It's not even "fair share" that is the question. The REAL question is what does THIS Gov't do with ALL that money? That's the problem.

If there wasn't "Gay Cowboy Poetry Reading" or "Shrimp on Treadmill" then we could talk about maybe, maybe- BUT then again, SINCE the Bush Tax cuts, the Gov't has taken in RECORD money. So, NO! No need to ask for more.

What this Socialist Krugman wants sounds so stupid if someone would finally mention that
"Gov't steals our money." The Founding Fathers did believe in helping those in need BUT didn't want a large Gov't. All the lies that the Bush Tax cuts took more money out is just wrong and the GOP needs to start defending that. We need to start telling the truth over and over. WHY can't the GOP get the truth out?

This guy is a nitwit and a fool. Why won't anyone ask him WHAT should that extra 40% in tax hike go towards? Roads & Bridges, Education, "training?" OR the HAND OUT OF CHECKS that is happening now. NJ spends $22K a year per student and has one of the worst records for graduation rates. MORE money doesn't solve the problem.

Also, what is magical about 91%? Why stop there? Why not go to 100% if you do not believe people "need" the money as Obama has said? Why not suggest no one is entitled to earn more than $250,000 period? Paul Krugman will have to do without a few extra Twinkies in his weekly diet.

Heck ya! and you did not earn a Nobel Prize in Economics like Krugman!

The Nobel in Economics is a silly thing. If economics were a science then economists would agree about the big issues and just add onto each other's work. Hayek and Milton Friedman earned Nobels too and they are 180 degrees from Krugman. Accepting Krugman's position just because he won a Nobel is shallow thinkng.