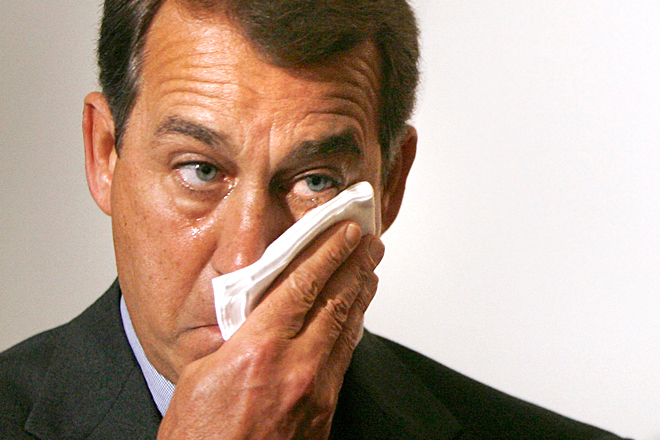 Boehner claims he can't get anything done, but you have to try before you can fail.

“[W]ithout a Republican in the White House, or 60 votes in the Senate, there are limits to what you could accomplish.”

That was House Speaker John Boehner in an exclusive interview with Politico, defending his lack of gumption as a leader. Complaints from members of the House Freedom Caucus and other conservatives in Congress that Boehner has been unwilling to fight the hard fights and capitalize on referendums from the 2010 and 2014 elections have the Speaker playing defense, but his comments rather miss the point.

It’s undeniable that a party can accomplish more when they control the White House as well as both branches of Congress - no one is disputing that, and no one expects conservatives to always get everything they want. What we do expect is for Republicans, who won control of both the House and Senate, to do something with those majorities other than spinelessly capitulate to the president at every turn.

What do we have to show for five years of Speaker Boehner? Really the only meaningful limit on government power has been the spending caps established by the 2011 Budget Control Act. Now, both the House and the Senate are poised to throw away that victory without a fight, effectively erasing any accomplishments of the Boehner House. In fact, Boehner has been explicit in his desire to do away with the caps once and for all.

Boehner claims that he is just as conservative as the guys in the House Freedom Caucus, but that he is simply more realistic. He is just trying to “make Washington work.” If making Washington work means giving in to the Democrats and refusing to fight for real reforms, then I would say he’s doing just fine.

As the architect of the trillion dollar Cromnibus spending bill, Boehner’s conservative credentials are not what he would like them to be. He’s repeatedly supported big spending increases and increasing the debt limit without reforms. He even removed Rep. Tim Huelskamp - one of the few Republicans courageous enough to stand against farm subsidies - from the Agriculture Committee after Huelskamp opposed Boehner’s speakership. It’s worth noting that Huelskamp has a degree in agriculture policy, and that it’s hard to see how anyone else in Congress would be a better choice for the Agriculture Committee than him.

Under divided government, it’s understandable, and indeed necessary that neither party has the ability to ram through their agenda unimpeded. But just because something is difficult doesn’t mean it shouldn’t be attempted. How many conservative bills has Obama had to veto under the Republican majority? Have they sent him a repeal of ObamaCare? Have they sent him tax reform legislation? How about real spending cuts? How about regulatory reform? For Pete’s sake, the items at the top of the Republican agenda in 2015 were building a measly pipeline (failed) and repealing a minuscule medical device tax (failed.) If you’re going to fail, at least fail while trying to do big things.

Boehner says he can’t get anything done with Obama in the White House. I say, not with that attitude.

FreedomWorks today urged President-elect Donald Trump to appoint Rep. Tim Huelskamp (R-Kans.) to serve as secretary of the Department of Agriculture in his administration. Rep. Huelskamp, who will leave Congress in January, grew up on his family’s farm and earned his doctorate in Political Science, with a focus on agriculture policy, from American University.