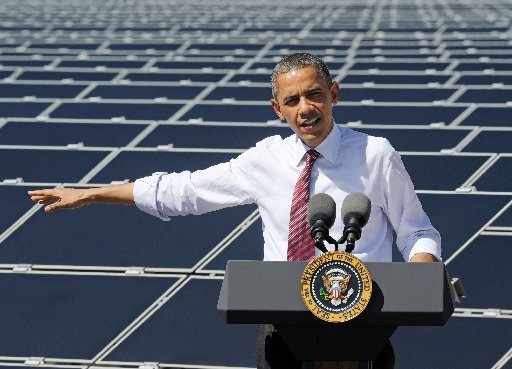 Obama’s Phone and Pen for Green Votes is Reprehensively Expensive

Obama is wasting *mega * amounts of dollars on solar energy. Diana Furchtgott-Roth explains in It Costs You a Fortune For Obama To Be Green:

Solar energy produces a small fraction of one percent of America's electricity and costs almost twice as much to produce as natural gas, according to the Energy Information Administration.

Why the push for solar? Because the President needs to activate the green voters. The White House Fact Sheet proudly proclaims, “President Obama is committed to making 2014 a year of action and has pledged to use the power of his phone and his pen to expand opportunity for all Americans.”

Here are the highlights from the White House Fact Sheet:

“And you can keep your health insurance and your doctor.” This is pure presidential edict without hope of reaching any of the stated goals. Let’s look at the 50,000 workers to be trained for the solar industry. Furchtgott-Roth reports:

“The Labor Department reports that only 4,130 people were employed as solar photovoltaic installers in May, 2013, the latest data available. These workers earned a median annual wage of $39,600. Only 50 employees worked on electric power generation, transmission and distribution-one hundredth of a percent of total employment in this industry.”

Furchtgott-Roth also notes that approving the Keystone XL pipeline would immediately create 20,000 jobs – direct and indirect. Of course, construction working on a pipeline from Canada to Houston is exactly what the green voters detest and the reason for the bogus “hope” list issued by the White House. Again, the entire solar push is to activate green voters. Furchtgott- Roth knows:

Training people for nonexistent jobs and browbeating companies into investing in more costly forms of energy is no way to stimulate economic growth and create jobs. If Mr. Obama wants to pander to his environmental base, there must be some cheaper way.

President Obama is desperately seeking to retain political power by saying what people like to hear rather than what is demonstrably true. Instead of safeguarding truth and honesty, the State then tends to become a major source of insincerity and mendacity.

Intentionally using everyone tax dollars for political power is reprehensible. Worse is a government which tends to become a major source of insincerity and mendacity.