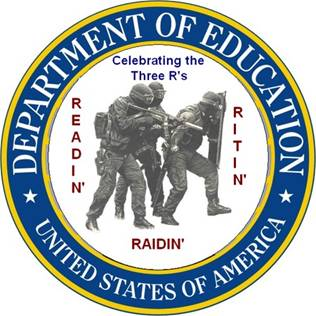 While speaking before the Constitutional Convention in 1787, James Madison said, “A standing military force, with an overgrown Executive will not long be safe companions to liberty.” Despite this strong warning from our founders more than 200 years ago, today’s federal government has quietly accrued significant policing powers in a wide array of agencies.

These federal enforcement officers are authorized to carry weapons and make arrests from Section 812 of the 2002 Homeland Security Act. This law authorizes the Offices of the Inspector General within each federal agency, which traditionally look for fraud and waste within the agency, to have officers that carry firearms, seek and execute warrants for arrests and makes arrests without a warrant while engaged in official duties. This section is rarely discussed because the actual language seems somewhat inconsequential. But in practice this law has changed how law enforcement is carried out at the federal level.

While there are federal agencies that should carry weapons and have arresting authority, such as the FBI, Secret Service, DEA and US Marshals, these agencies had this authority before the 2002 Homeland Security Act. They would keep this authority even if the agencies not traditionally involved in law enforcement activities lost their arresting powers. Unfortunately, the expansion of federal enforcement authority has been accompanied by an increase in the abuse of that power. There have been many examples of abuses by different agencies that have not traditionally had law enforcement officers and have been in a rush to use their new authority:

• The Department of Education raided the home of Kenneth Wright looking for his estranged wife who was accused of misusing federal aid for students. Officers from the Department dragged Mr. Wright out of his house in his boxers at 6 a.m., threw him to the ground and handcuffed him. While this occurred his children -- ages 3, 9 and 11 -- were left in a patrol car for two hours. His estranged wife no longer lived at the house and was not there at the time of the raid.

• Officers in full SWAT gear from the U.S. Fish & Wildlife Service stormed the home of Kathy and George Norris. The agents instigated the raid for George’s failure to file the proper paperwork for orchids he imported. Kathy and George were grandparents in their 60s when the raid took place.

• The EPA led a joint raid along with the U.S. Fish & Wildlife Service, the Bureau of Land Management, the Coast Guard, the National Oceanic and Atmospheric Administration (the guys that predict the weather) and the U.S. Park Service on a mining operation for possible violations of the Clean Water Act.

• The Bureau of Land Management had a long standoff with Cliven Bundy, a rancher, over his use of federal land to graze his cattle.

• In 2010 the FDA raided Dan Allyger’s Rainbow Acres Farm, an Amish farm in Pennsylvania, because he had been selling unpasteurized milk across state lines.

The potential for abuse increases as more federal agencies establish armed law enforcement officers. In addition to those already mentioned, agencies with police power include: the Small Business Administration, Social Security Administration (which three years ago asked to purchase 174,000 rounds of .357 Sig 125 grain bonded jacketed hollow point bullets), Federal Reserve Board, Department of Energy, Office of Personnel Management and the Railroad Retirement Board, among others.

This is not to say that these agencies do not encounter circumstances where armed officers would be prudent, or even necessary, but under such circumstances they should call federal agencies with experience, such as the FBI, or coordinate with local law enforcement.

Like Madison, the rest of our Constitution’s framers would be extremely uncomfortable with federal executive agencies carrying out police raids. Most were students of history and recalled the horrors that a standing militarized police force brought to Europe and ancient Rome. The framers were especially concerned with the British practice of sending troops to the Colonies, and using them as a police force to harass the Colonists. The Third Amendment was as much a response to the use of the military to police the citizenry as it was a response to the forced housing of soldiers.

In a press release announcing the bill, Rep. Stewart said, “When there are genuinely dangerous situations involving federal law, that’s the job of the Department of Justice, not regulatory agencies like the FDA or the Department of Education. Not only is it overkill, but having these highly-armed units within dozens of agencies is duplicative, costly, heavy handed, dangerous and destroys any sense of trust between citizens and the federal government.” The president and a majority in both houses of Congress should be able to support this sentiment.

Under the 2002 Homeland Security Act we have seen a massive expansion of police activities carried out by federal agencies. The agents carrying out these activities generally take the form of militarized SWAT teams. This has left Americans wondering why officials from the Department of Education or EPA are barging into their homes and businesses dressed in full SWAT gear.