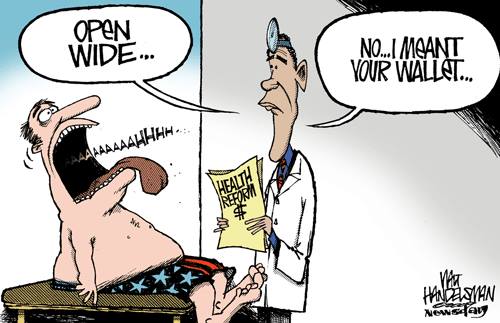 In September, the Obama administration boasted that some 7.3 million Americans had enrolled in ObamaCare health plans. Though down from the initial 8.1 million reported in May, due to attrition by consumers not making premium pay or data inconsistencies, the number still exceeded the Congressional Budget Office's 7 million estimate for the first open enrollment period for plans taking effect in 2014.

The figure announced in September, however, was misleading. Bloomberg News reports that the House Oversight and Government Reform Committee has discovered that the Centers for Medicare and Medicaid Services boosted the total number of enrollments by including 400,000 standalone dental plans (emphasis added):

Without the dental plans, the federal government would have had 6.97 million people with medical insurance under the law known as Obamacare, investigators for the House Oversight and Government Reform committee calculated, using data they obtained from the U.S. Centers for Medicare and Medicaid Services.

Federal officials said in September they had 7.3 million people enrolled in coverage through new government-run insurance exchanges. They didn’t distinguish between medical and dental plans, breaking from previous practice without notice.

Blending dental and medical plans let the administration assert that enrollment remained greater than 7 million, the original projection of the Congressional Budget Office. The move also partly obscured the attrition of more than 1 million in the number of people enrolled in medical insurance.

Given attrition rate, the number of paid enrollments has dipped even lower. A spokesman with the Centers for Medicare and Medicaid Services told the Washington Examiner that the actual number of consumers enrolled in health plans as of mid-October is 6.7 million, which is about 300,000 enrollments less than the Congressional Budget Office's estimate.

It's the sort of transparency, or lack thereof, that Americans have come to expect from the Obama administration. But, hey, it was designed that way. Just ask Jonathan Gruber.

I am here to say about the function of the explorer http://fileexplorerwindows.com i can not share the details clearly that why i am share a platform from this you can know about the whole function of this explorer.