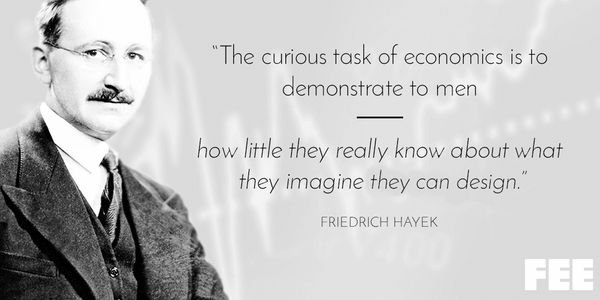 Hayek could have been talking about ObamaCare

Health insurance companies are seeking large premium increases for many health plans available on the ObamaCare exchanges. The proposed increases vary by state, but the average ranges from 23 percent in Illinois to 36 percent in Tennessee to 54 percent in Minnesota.

Insurers have cited the higher than expected claims as the reason for the increases, a symptom of risk pools comprised of older and sicker consumers who utilize their coverage more often than younger and healthier enrollees. State insurance commissioners and regulators are reviewing the proposed increases and negotiating with insurers over the size of the rate increases. With the November 1 open enrollment date approaching, rates will be released soon, if they have not been already.

During a trip to Chattanooga, Tennessee in July, President Barack Obama urged the crowd to pressure state insurance commissioners to reject the proposed increases. "So I think the key for Tennessee is just making sure that the insurance commissioner does their job in not just passively reviewing the rates, but really asking, 'OK, what is it that you are looking for here? Why would you need very high premiums," he said. "And my expectation is, is that they'll come in significantly lower than what's being requested."

This appears to have been one of the first shots across the bow of insurers ahead of the 2016 open enrollment period. On July 21, Kevin Counihan, the CEO of the federal Health Insurance Marketplace, sent a letter to state insurance commissioners in an effort to pressure them into rejecting large premium increases. "Data show that consumers who signed up more recently are healthier than enrollees who were among the first to sign up during the first Open Enrollment Period. Further, recent experience may show an improved issuer medical loss ratio," Counihan wrote. "In addition, risk pools are expected to continue to get healthier. Many issuers are assuming consumers who enroll in Marketplaces during the remainder of 2015 and into 2016 will exhibit even lower rates of utilization than 2014 enrollees."

Counihan also argued that state insurance commissioners should reject the proposed increases because of ObamaCare's "risk corridor" program, or the bailout for health insurers that participate in ObamaCare. This part of ObamaCare provides payments from a pool of money collected from profitable plans to insurers whose plans lose money. There are two catches that immediately come to mind. First, the program is not collecting enough money to cover the losses sustained. Second, taxpayers could be on the hook for losses that exceed the sum the money collected.

While Counihan's argument that ObamaCare provides a bailout for insurers is technically true, it is important to remember this part of the law has an expiration date of December 31, 2016. Moreover, Congress has mitigated the risk to taxpayers in the CROminbus package that passed in December, though temporarily.

Perhaps the trends are moving in the direction in which Counihan claims, but insurers are looking at the data from 2014, the first full year available after ObamaCare's implementation, to prepare their rate increases for 2016. Though insurers know that they will not get the rate hikes requested, they realize that paying out more than what is collected is unsustainable and could make them financially insolvent over the long term. Rather than pressuring state insurance commissioners, the administration should realize that this situation is a creation of ObamaCare.

Time to time windows get always launching there new version http://gethelpwindows10.com from this you can see that how many types of version will be launched and if you are using previous version than there is a idea to upgrade the version.