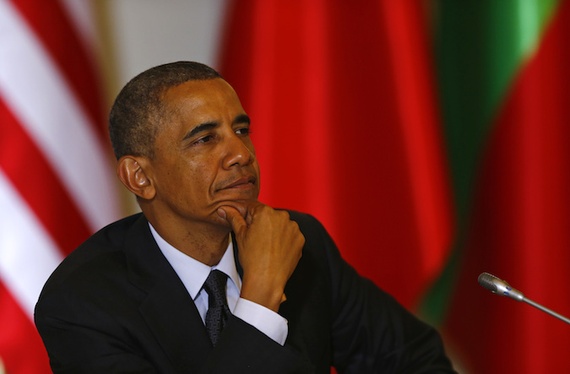 Addressing the United Nations, President Obama praised America for resolving religious and racial differences, which was achieved “with respect for the rule of law.” Mr. Obama said,

“… we address our differences in the open space of democracy with respect for the rule of law, with a place for people of every race and every religion.”

Incredibly, President Obama brags to the world about America’s “respect for the rule of law” as he orders airstrikes on Syria. This is an act of war made by the President in violation of Article One, Section Eight of the Constitution which commands: “Congress shall have Power … To declare War.” The clear intent of the Constitution was best stated by James Wilson at the Constitutional Convention, "It will not be in the power of a single man, or a single body of men, to involve us in such distress."

Thus, Mr. Obama appreciates the primacy of the rule of law as essential to superior governance, but intentionally violates the principle. Here is a definition of the rule:

A government with moral and legal authority promulgates written rules and universally, impartially and uniformly enforces the rules, which provides a predictable and stable legal order on which to base economic and personal decisions. The law prevails, not the proclamation or arbitrary decision of a ruler, government bureaucrat, enforcer (e.g., policeman) or judge.

Harmfully, Mr. Obama has consistently violated the intent and purpose of the Rule of Law. The promulgation and the arbitrary repeals and delays of ObamaCare violate the rule of law. His unilateral order to bomb Libya violated the rule. Recess appointments violated the rule, Obama’s EPA exceeded its authority. And the list is much longer. Even the Supreme Court, which loathes to reverse a President, has ruled that the Obama administration has exceeded its authority.

Of course, these presidential excesses negatively impact nearly every American. Unilateral mandates impact the cost and quality of health care, the cost of energy, the cost of wars, the opportunity to start and expand business, employment, job creation and more. Mr. Obama knows this, but continues to violate the Rule of Law with his arbitrary decrees on America and world. Harmfully and regrettably, Americans and the world are greatly harmed – economically, morally and politically.

Read an excellent article by Doug Bandow on the debate and intent of our Founders.