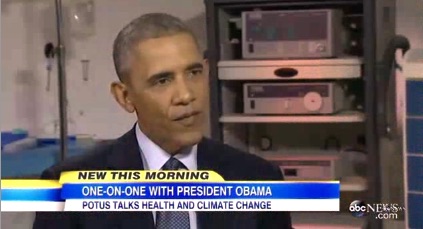 Obama is now claiming that climate change is a cause of health problems and during an interview on ABC News, the president emphasized the point by mentioning that an asthma attack when Malia was very young resulted in an emergency room visit.

“Well you know Malia had asthma when she was 4 and because we had good health insurance, we were able to knock it out early….” the president told ABC News’ chief health and medical editor, Dr. Richard Besser, in a one-on-one interview yesterday. “And if we can make sure that our responses to the environment are reducing those incidents, that’s something that I think every parent would wish for…”

Besser, who met with the president yesterday at Howard University’s Health Sciences Simulation Lab, asked the president why people should care about the impact of climate change on public health when there are so many other pressing health problems.

“Keep in mind that climate change is just one more example of how the environment will cause health problems, and I think most people understand that,” the president responded.

Don’t be fooled by Obama’s shameless exploitation of Malia’s past illness. Linking climate change to heath issues, especially with children, is part of a communications plan to generate fear and public support for climate change regulations.

An EPA strategy document discovered by a Freedom of Information Act (FOIA) request advised the agency to link climate change to adverse health effects in order to make the issue more relevant to Americans.

This incident shows, once again, Obama will do anything to advance his radical agenda.

The president MUST do what ever he can, how ever he can to move the carbon limitation process forward. If we do not, we are damning our grand children to a world they will not be able to live in.

The Ozone Bureaucracy Complex: EPA Regulations That Can't Distinguish Between a National Park and City Harm the Poor Most

In October 2015, the EPA announced a new standard for ground-level ozone, tightening its stringent existing standard even more. It set the new standard at 70 parts per million (0.0070% of the atmosphere), a 9% decrease from the previous standard of 75 ppm established in 2008. Along with nearly 1000 counties nationwide that may not meet this new standard, one-third of all US counties, you’ll find at least 26 national parks. Does it seem ridiculous to you that the EPA has created a situation where some of the most rural and pristine areas of the United States could be lumping in the same category with the most densely-populated and industrialized? Well, then you don’t know the EPA.

Uncovering Misconduct at the EPA

On Wednesday, the House Committee on Oversight and Government Reform held a hearing to examine employee misconduct at the EPA. Misconduct has continued at the EPA despite repeated reform efforts and multiple hearings. Chairman Jason Chaffetz (R-Utah) opened the hearing by calling the EPA “one of the most toxic places in the federal government to work.” That is a big claim, and one that should alarm conservatives and libertarians who consciously worry about corruption, protectionism, and bureaucracy in the federal government.

On the eve of the March 30 oral argument in U.S. Army Corps of Engineers v. Hawkes, a key Supreme Court case that will determine the rights of landowners to challenge the federal bureaucracy's assertion of regulatory jurisdiction over their land, FreedomWorks Foundation Executive Director Curt Levey commented:

The EPA Is Using Private Emails to Talk to Lobbyists

A recent report from the Daily Caller highlights how the Environmental Protection Agency frequently uses private email accounts to communicate with environmental lobbyists, ducking the transparency and record-keeping requirements that are supposed to bind the agency.

Following the release of a letter from Senate Majority Leader Mitch McConnell (R-Ky.) to the National Governors Association, in which he urged states to cease compliance with the EPA’s Clean Power Plan regulations, FreedomWorks Foundation Executive Director Curt Levey commented:

Pushing Back Against the EPA

Lately, Congress has been taking some significant steps to push back against federal regulatory agencies. Regulations cost our economy $2 trillion a year, and are written and enforced by unelected bureaucrats with no accountability to voters. They undermine property rights, representative government and the rule of law, and its high time someone did something about it.

The negative impacts of federal regulations on jobs, wages and innovation was the subject this week of hearings before the House Judiciary Committee. Rep. Darrell Issa (R-CA 49) opened the hearing before the subcommittee on regulatory reform by noting that many in Washington consider the “endless expanding web of intricate [federal] rules” to be natural or desirable. “No one they know is going to lose a job because of overregulation,” he added.