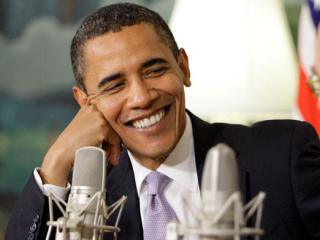 Five years later, he's still trying to convince us that his signature achievement is not a disaster. No sale.

An old rhetorical question asks: "If social Security is such a great deal, why is it mandatory?" A topically apt paraphrase of this would be: "if ObamaCare is so good for health care, why is the president still struggling to sell it five years after it became law?" What does it say about a policy that people refuse to take advantage of - and I use the word "advantage" very loosely - without significant arm twisting? Even though it has been made flat out illegal not to purchase health insurance, millions of people are still staying far, far away from ObamaCare's insurance exchanges, because they know that the legal penalty will actually be less painful than participating in the government-controlled health insurance market.

Enrollment numbers for the health care law have always fallen below expectations, so much so that the Department of Health and Human Services has had to revise their projections downward again and again, moving the goalposts to create the illusion of success to anyone not paying even a little bit of attention.

In an embarrassing attempt at damage control, President Obama is embarking on a media blitz with the goal of trying to get more people to sign up on the crumbling exchanges. It would be funny if it weren't so sad; a sitting president entering his last year of office trying, unsuccessfully, to convince the American people that his "fundamental transformation" has made their lives better. The fact that such a strategy is even necessary is proof that it hasn't.

It's not at all surprising that even the full force of law is not enough to get people to enroll in the exchanges. Prices for the plans, both in terms of deductibles and premiums, are soaring. The health care coops established as a part of the law are folding. The subsidies promised to both individuals and companies are drying up, exacerbating the cost problem. As more and more data becomes available, it has become undeniable that ObamaCare has made life worse for most Americans. If the president thinks he can convince people to act against their own best interest simply because he goes on the radio and says everything is great, he's demonstrated beyond all doubt just how out of touch he is.

If obamacare was so great why did Jonathan Gruber say the administration counted on the stupidity of the American people to pass it? Why does over half the country not want it? Why did no republican vote for like we the people told them to do?
We all know this is nothing more than a transfer of wealth and the acquisition of more government control.

If there was anything great about "Obamacare," Obama would have been the first to sign up. The fact that he made SURE to exempt himself is all that needs to be said. It's crap and he knows it. When he "sells" it, it's only more lies.

stone stone it's left wing buffoons like you that support this crap. The sooner this mess is repealed the better off we all will be. It should have never been law in the first place. At least the GOP was smart enough not to vote for it.

We conservatives have been played for fools. After we gave them the house, then the senate, the republicans haven't done squat to repeal this monstrosity. They knew when it passed that it would pass without one republican vote - so they had a free pass to look like they were standing against it for their voter base - but now that we've given them the numbers to do something about it, can't find the political will to kill this law before it bankrupts the middle class, and eventually the country.

Exactly how is Obama desperate? The GOP buffoons spent millions of our tax dollars trying to stop it and they lost. Over and over again. Perhaps a better use of my tax dollars would simply be to "defund" the GOP.

FreedomWorks today blasted the Obama administration for its plan to bail out health insurance plans that have lost money participating in ObamaCare. The plan, which was described in the Washington Post Thursday, circumvents the congressional prohibition on taxpayer dollars being used for ObamaCare’s risk corridors program.

FreedomWorks’ Statement on Aetna Scaling Back Participation in ObamaCare

Following reports that Aetna plans to significantly scale back its participation in the ObamaCare exchanges, FreedomWorks CEO Adam Brandon commented:

FreedomWorks today echoed calls from Sens. Ben Sasse (R-Nebr.) and Ron Johnson (R-Wis.) for answers from the Department of Health and Human Services (HHS) about the prioritization of payments to health insurance companies over taxpayers through the controversial ObamaCare reinsurance program.

Americans Should Reject a “Public Option” in ObamaCare

Following an editorial by President Barack Obama in the Journal of the American Medical Association, in which he called for a so-called “public option” component for ObamaCare, FreedomWorks CEO Adam Brandon commented: