For the second straight year, Social Security paid out more in benefits than it took in through payroll taxes in 2011, according to a Congressional Budget Office report.

According to the report:

As more members of the baby-boom generation enter retirement, outlays will increase relative to the size of the economy, whereas tax revenues will remain at an almost constant share of the economy. As a result, the gap will grow larger in the 2020s and will exceed 20 percent of revenues by 2030.

The number of retirees is growing far faster than the number of new workers. The ratio of workers to retirees has grown from 42 to 1 in 1940 to just 3.3 to 1 today. Social Security is facing more than $20 trillion in unfunded future liabilities. How is that structurally sound?!

Check out this graph from the National Center for Policy Analysis showing the declining number of workers per retiree: 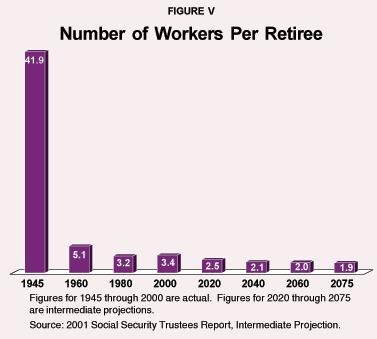 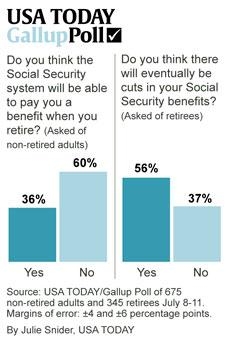 Young people are the most pessimistic about the future of Social Security. And rightfully so. Three-fourths of young adults between the ages of 18 to 34 don’t expect to see a Social Security check when they retire.

The numbers don’t lie: young people shouldn’t expect to see a Social Security check in their lifetimes unless there are major changes to the program. That’s unlikely to happen anytime soon since most politicians are still afraid to touch Social Security in its current form.

This is why young people should be allowed to opt out of Social Security, if they wish. It’s cruel to force young people to pay into a terribly mismanaged government program that they don’t expect to get any benefits from when they retire. No wonder that Obama is losing youth support.

Americans should be allowed to invest in their retirement as they see fit—not be forced into a mandatory Ponzi scheme against their will.

Does not help when people, like my old neighbor, who are totally capable of WORKING, don't, but freeload off the system & take SSI & just use drugs daily..... INSTEAD of working!!! Their are people who REALLY need to be reinspected & should not be on it & collecting! He has just turned 21!!! When did he EVER pay INTO Social Security?! To have been on it for years already?! If he is capable of going on a 'drug hunt' each & EVERYDAY for drugs, he is totally capable of WORKING then too!!

since when is Social Security an entitlement? we all paid social security taxes. if the gov. didn't borrow money from social security for other reasons there should be enough money for everyone

Does not help when people, like my old neighbor, who are totally capable of WORKING, don't, but freeload off the system & take SSI & just use drugs daily..... INSTEAD of working!!! Their are people who REALLY need to be reinspected & should not be on it & collecting! He has just turned 21!!! When did he EVER pay INTO Social Security?! To have been on it for years already?! If he is capable of going on a 'drug hunt' each & EVERYDAY for drugs, he is totally capable of WORKING then too!!